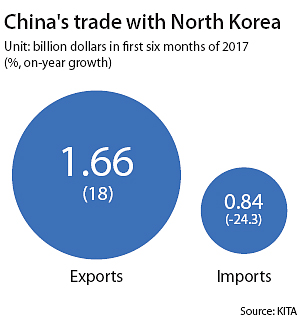 China’s exports to North Korea grew nearly 20 percent in the first half of the year, according to the Korea International Trade Association on Wednesday, despite its promises to crack down and impose international sanctions.

China’s exports to the North in the first six months of 2017 totaled $1.66 billion, 18 percent higher than the corresponding period in 2016.

Its imports, however, showed a significant dip. Imports from North Korea in the first half of the year were $844 million, down 24.3 percent from the previous year.

Imports from North Korea to China slumped as much as 52.3 percent year on year in March, a month after China stopped all imports of the North’s coal and lignite. China imported $219.5 million worth of coal from North Korea between January and June, a 54.9 percent year-on-year drop.

Following tougher sanctions by the U.N. Security Council after North Korean nuclear and missile tests, the Chinese Commerce Ministry announced three lists of items that could not be imported from and or exported to North Korea between April 2016 and February 2017. Good exported for humanitarian purpose are allowed.

Even though jet fuel was named as one of five banned export items in April 2016, China’s export of jet fuel to the North increased 18.3 percent on year in the first half of the year to reach $22.6 million. Exports of rocket fuel and helicopters - also on the banned list - were nil during the same period.

“China’s exports to North Korea were augmented in spite of the sanctions,” said the KITA. “Shipments of made-in-China mobile phones spiked 92.8 percent on year to total $54 million in the first six month and textile exports also expanded at a sizable rate.”

North Korea had 3.24 million mobile phone users as of the end of 2015, the latest data available, according to the state-run Korea Information Society Development Institute last month. That is almost 47 times the figure in 2009, 69,261, when the country first allowed ordinary citizens access to mobile phones.

The North developed and assembled its first touch-screen mobile phone in April 2011 and began churning out phones in 2013. North Korea boasted of having 19 types smartphones in 2016, most made out of parts from China, experts say.