Citizens amplify their concerns to the Blue House : Some worry that the petition platform could be too crowded

Citizens amplify their concerns to the Blue House : Some worry that the petition platform could be too crowded 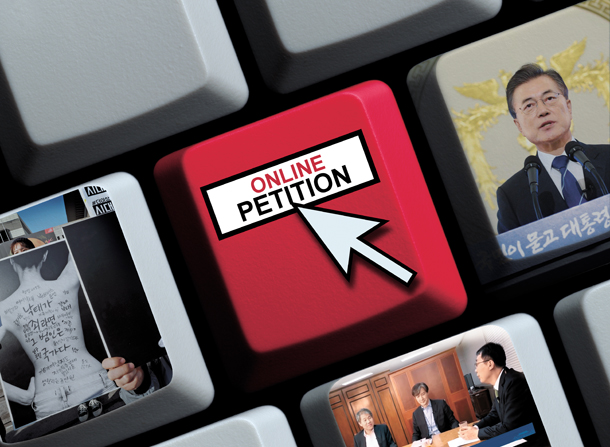 From left: People hold a pro-abortion protest on Nov. 9, with a picture reading, “If abortion is a crime, then the state is the criminal”; Cho Kuk, senior secretary for civil affairs, President Moon Jae-in’s chief press secretary Yoon Young-chan and Kim Su-hyun, senior secretary for social affairs answer a petition calling for a review of the Juvenile Act on Sept. 25; President Moon speaks to the press in celebration of his 100th day in office on Aug. 18. [NEW1, SCREEN CAPTURE, JOONGANG ILBO]

“President Moon Jae-in, please help me get a job.”

“The natural disaster text messages should be sent in English as well.”

“Why do we always have to take the CSAT on Thursdays?”

“The army should build brothels inside the camp.”

“The government should punish the guy who petitioned for a brothel inside the camp.”

When President Moon Jae-in took office earlier this year, he pledged that the new government would walk a completely different path from his predecessor, and that his administration would focus on communication, making sure to heed the voices of the people. Keeping to his word, the Blue House opened an online petition platform to anyone with an account on Facebook, Twitter, Naver or Kakao on Aug. 19, in celebration of Moon’s 100th day in office. People can also comment on other people’s petitions, and add their signatures to support petitions that they agree with. 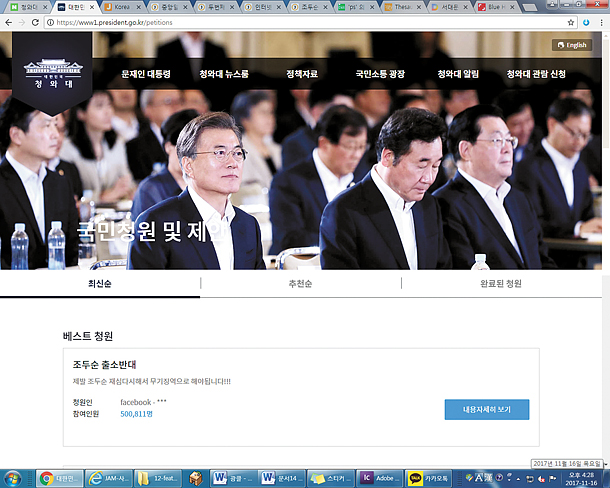 The Blue House online petition system was set up on Aug. 19 to celebrate President Moon Jae-in’s 100th day in office. The website currently does not provide an English version. [SCREEN CAPTURE]

In September, the Blue House set clear standards for the petitions, stating that if a single petition collects more than 200,000 people’s signatures, then related government officials, such as ministers or senior secretaries, would comment on the issue at hand. Since then, users have been posting messages across social media, asking friends and followers to sign petitions they submitted so that they might get a response from the government.

As of Nov. 20, three months after the system opened its doors, over 45,000 petitions have been posted, with hundreds more popping up every day on the Blue House’s board. Yet, looking over the petitions that have been posted, it seems that quite a lot of people are just taking out their day-to-day complaints, purposefully touching on sensitive issues to anger others, or just writing down what they wish they could say to the president in person, rather than treating the petition as a serious way to get their voices heard by the Blue House and the president.

The first petition to be granted an answer from the Blue House was the plea to amend the current Juvenile Act. The details of the petition stated that the current act, which protects those under the age of 13 from receiving the same punishment as adults for criminal offenses, should be amended so that the age is lowered or the protective measures are totally removed.

There had been arguments in the past that juvenile offenders often take advantage of the law to commit crimes and get away with them without paying the price.

But calls for amendments to the law got louder on Sept. 1, when a group of four female middle school students brutally attacked a 14-year-old girl for 90 minutes. The case went viral on social media after one of the students sent her cousin a photograph of the victim, and asked her whether she was “too harsh” and if she was “going to get jailed.” The cousin released the message and the photo.

What angered people most was that, even though the beating had been ruthless beyond comprehension, one of the offenders was not subject to criminal charges because she was 13 years old, and thus under the protection of the Juvenile Act. The petition received a total of 392,848 signatures in 30 days requesting for changes to the current Juvenile Act. It was the first petition to get an answer from the Blue House.

As the president promised, the government posted a video from Cho Kuk, senior secretary for civil affairs, Moon’s chief press secretary Yoon Young-chan and Kim Su-hyun, senior secretary for social affairs on Sept. 25, who came together to answer the people’s call. “The people’s request that even though they were juveniles, they had committed a dire crime and that they should be punished accordingly does have a just side to it,” said Cho. “However, the idea that such crimes would diminish with just one solution is a misunderstanding. Different cases require different approaches, and different people need different solutions as well.

“What we need is to prevent such crimes from happening, which is actually harder than punishing crimes. It’s something that needs the cooperation of not just the state, but society and the family all together. We need to make sure that the current system works properly, make sure to come up with other measures to deal with different cases and help the young students get back to society.”

The second petition to exceed 200,000 signatures was completed on Oct. 30. It called for the legalization of abortion and the sale of abortion pills - known as mifepristone - which are currently illegal in Korea, except for in special circumstances such as diseases or pregnancy caused by rape.

“Making abortion and abortion pills illegal means that this country does not think about the health and safety of women. No contraceptive measures are guaranteed 100 percent effective, and can lead to a pregnancy. The country should protect not only the physical health, but also the psychological health of its people,” reads the petition.

Another ongoing petition will also see an answer after Dec. 5 when it ends, with over 520,000 people having signed as of Nov. 20. The petition asks for Cho Du-sun not be released from prison even after his sentence ends. Cho kidnapped and brutally raped an 8-year-old named Na-young in 2009, and received 12 years in jail.

The motto of the online petition platform when it first launched, according to President Moon, was “The people ask, and the president answers.”

Fittingly, the first petition submitted was a request to search for the crew of the missing cargo ship, the Stellar Daisy, that sunk on March 31. Detailing how the ship went missing and that its crew still may be lost in the Pacific Ocean, the petition ended by thanking the government for creating the platform for citizen voices.

Yet, as time went on and the word got out that people could write their message to the president on the Blue House’s petition board, citizens started swarming the page with all kinds of messages, many of which had nothing to do with the government, or were jokes just to annoy other users.

A petition posted on Nov. 20, titled “Please Read This,” went on to say, “Hello, I’m feeling really good today, because a swallow has left things around me, and except for the fact that it’s getting in the way of my diet, I’m feeling really good today, just a little bit. You people at the Blue House should work and smile as well. But I really think we need capital punishment. And abortions. But I love everyone at the Blue House and the President. Cheers.”

Even posts with a clear message were often things that involved unreasonable requests from the government, such as:

“Please Can You Tell Me Some Loan Services I Could Get?”;

“Could the President Send my Wife A Video of Him Congratulating Us on Our Marriage?”;

“The Education System Needs to Be Revolutionized From Scratch,”;

Since so many people are posting new petitions everyday, most of them receive no attention from others, and petitioners often resort to other social media to ask for signatures from their friends and followers. Countless posts on Facebook ask others to join in on a certain subject.

“It seems like the Blue House petition website has become just another version of [portal site] Daum’s Agora, where people go to argue about all sorts of things,” said 40-year-old Kim in an interview with the JoongAng Ilbo, an affiliate of the Korea JoongAng Daily.

“I think some people don’t know that they should really take this seriously, and just think that this is like posting their thoughts the same way they do on their personal social media accounts,” said 23-year-old Park.

The Blue House already had an “e-People” board, which serves a similar function to the newly-created petition platform. Yet, the e-People board was run by the Anti-corruption and Civil Rights Commission, and the answers were given by those working for the commission.

“The Blue House online petition [platform] answers to the majority of the people’s call, and thus the answers are more responsible, since they come from senior secretaries and ministers,” said a Blue House spokesperson.

“It’s a plus that [the government] has come up with a means to directly communicate with the people,” said Min Kyung-bae, a professor at Kyung Hee Cyber University, in an interview with the JoongAng Ilbo. “But I believe they may be a little unprepared to institutionalize the people’s voices. Only a few petitions with the most approvals get attention, and those without, get ignored.”

“If the online petition system is going to work, then the people, on their own, should also try to ensure that it doesn’t turn into a witch hunt or an instigation. The Blue House needs to look over measures to prevent such things as well,” said Kim Eui-young, a politics professor at Seoul National University.

The president himself commented on the increasing popularity of the online petition board on Nov. 20, revealing his satisfaction with the current situation. “I believe this is a very good sign,” said Moon. “There are some cases that are hard, since they can’t be taken in by the current law or institution, but there needs to be a place for the people to express their voices nonetheless. Even those that can’t be solved right away will be a good influence on the amendment of future laws.”