North drops out of joint cultural event at Mount Kumgang

North drops out of joint cultural event at Mount Kumgang 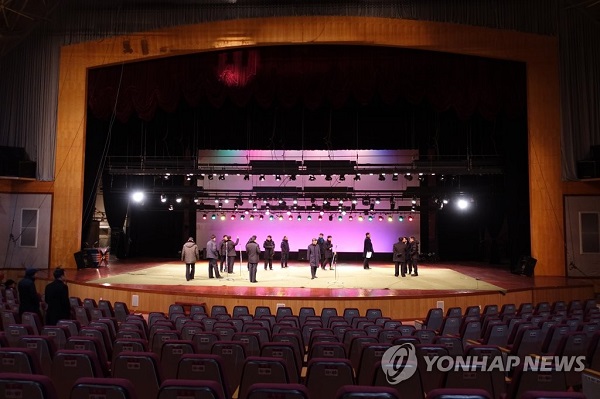 North Korea notified the South late Monday night it would ditch the joint cultural event both Koreas agreed upon at Mount Kumgang, originally planned to be held this Sunday, after accusing South Korean media of “insulting” its sincerity towards the PyeongChang Winter Olympic Games and taking issue with its “domestic celebrations.”

The South’s Unification Ministry, which handles inter-Korean affairs, said in a statement that it was “very regretful” Pyongyang decided to call off an event that was bilaterally agreed upon, urging the regime to carry out their joint agreements based on mutual respect and understanding.

North Korea’s mentioning of “domestic celebrations” appears to be in reference to its upcoming military parade, as suggested by multiple South Korean officials in the past weeks, though the regime has yet to confirm the speculation.

Unification Minister Cho Myoung-gyon said last Friday during a forum held in Seoul the North was preparing for a “massive” and “threatening” military parade that will likely fall next Thursday, the eve of the Olympics, to mark its army founding day.

Among several Olympic-related events, the South and North had agreed to hold a joint cultural event at the symbolic mountain north of the border near the east coast, once a linchpin of inter-Korean cooperation before a South Korean tourist was fatally shot by a North Korean guard in 2008.

Since the North opened a tour zone at the scenic area in 1998, some 2 million South Koreans had visited the Mount Kumgang resort until the fatal shooting, which prompted Seoul to impose a travel ban.

Soon after Seoul and Pyongyang agreed to hold a joint cultural event there earlier this month, a 12-member delegation from the South entered the North last Tuesday, staying until Thursday to examine the facilities.

Upon their arrival back south, the delegation told local media last Friday that they had agreed the event would be no more than two hours long, attended by some 300 audience members from each country. Among other suggestions, Seoul is known to have offered a K-pop concert. Both countries were planning to split the total time for the event in half and hold a joint performance of some sort towards the end.

Some South Korean government officials were quoted by local media outlets over the past weekend as saying the North requested the South to bring its own diesel oil to light up the concert hall, citing its shortage of supply.

Local authorities were reportedly contemplating the matter because the move could trigger dismay from the international community. Under United Nations Security Council resolutions, North Korea is allowed to import no more than 500,000 barrels of refined petroleum a year, though the amount used for the concert alone wouldn’t have exceeded that limit.