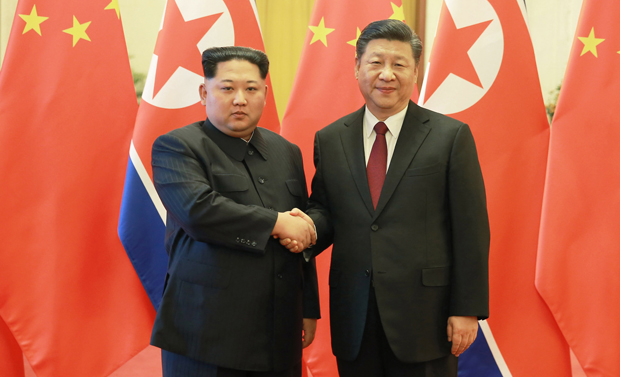 North Korean leader Kim Jong-un, left, shakes hands with Chinese President Xi Jinping, right, in the Great Hall of the People in Beijing during an unannounced visit to the Chinese capital from Monday to Tuesday to discuss issues pertaining to the Korean Peninsula and bilateral relations. [YONHAP]

North Korean leader Kim Jong-un made an unannounced visit to China from Monday to Tuesday on the invitation of Chinese President Xi Jinping, North Korea and China’s state news media confirmed Wednesday, an international diplomatic debut for a young leader who’s only weeks away from holding summits with Seoul and Washington.

It was Kim’s first known trip outside North Korea since he took power in December 2011 following his father’s death, and his first meeting with another government leader.

Rumors spread quickly Tuesday that either he or another high-level official from Pyongyang was in Beijing for talks with Xi, though neither the North Korean, Chinese or South Korean government gave any confirmation.

Confirmation that Kim was in Beijing came only after he crossed back into North Korea on Wednesday morning. North Korea’s state-run Korean Central News Agency (KCNA) said Kim, 34, departed the North on Sunday and arrived in Beijing on Monday.

Upon his arrival, Kim met with Xi in the Great Hall of the People in Beijing, where they “exchanged views on important matters including the development of DPRK-China friendly relations and the issue of handling the situation on the Korean Peninsula,” according to an English report from KCNA, using the acronym for North Korea’s official name, the Democratic People’s Republic of Korea.

On denuclearization, Kim was quoted by China’s state-run Xinhua News Agency as saying it was his “consistent stand to be committed to denuclearization on the peninsula, in accordance with the will” of his father, Kim Jong-il, and grandfather, Kim Il Sung, who founded North Korea.

The issue of denuclearization of the Korean Peninsula can be “resolved” if South Korea and the United States “respond to our efforts with goodwill, create an atmosphere of peace and stability while taking progressive and synchronous measures for the realization of peace,” Kim said, continuing that he hoped to enhance “strategic communication” with Beijing during the process.

Neither KCNA nor Xinhua specified Kim’s definition of denuclearizing the Korean Peninsula, but North Korea watchers have long argued that Pyongyang’s meaning of the term would require Washington’s nuclear umbrella over South Korea and Japan to be removed and American soldiers stationed in the South withdrawn before it could consider giving up its nuclear arsenal.

Many have warned of the danger of any U.S. withdrawal. South Korea’s Unification Minister Cho Myoung-gyon, who oversees relations with the North, told the National Assembly last October that North Korea’s ultimate goal for developing nuclear weapons was survival - and to reunify the Korean Peninsula under North Korean rule. For that to work, analysts say North Korea would use its intercontinental ballistic missiles to deter the Untied States from coming to the aid of the South if it was attacked.

Regarding Beijing-Pyongyang relations, Xi reportedly proposed to Kim that their countries exchange high-level visits, boost “strategic communication” for the sharing of in-depth views on major issues and enhance people-to-people exchanges.

Kim’s visit to Beijing came shortly before he is expected to hold his first summit with Moon in late April, the third meeting of its kind between two Korean leaders, and a first-ever summit with the United States afterward, although the dates for both meetings have yet to be determined.

Local pundits speculate Xi’s invitation to Kim was a reflection of China’s anxiety that it was bypassed in the recent flurry of diplomatic overtures among Seoul, Pyongyang and Washington, and that it perceived its grip over Northeast Asia affairs eroding. For North Korea, the regime would need Beijing’s backing to ease sanctions against the regime, and support from Xi was critical in building its negotiation power with the United States for when Kim meets Trump.

“Watching the Donald Trump White House recently reshuffling the president’s national security team to add more hard-liners on North Korea policy,” said Kim Han-kwon, a professor of Asian and Pacific studies at the Korea National Diplomatic Academy, “North Korea might have thought it can’t achieve what it wants in the upcoming summit, so it’s trying to restore China-North Korea relations to a certain level in order to maximize its gains.”

On top of that, the professor continued, Kim Jong-un may have sought practical tips from Xi before entering denuclearization talks with the United States.

Noh Kyu-duk, South Korea’s Foreign Ministry spokesman, said in a statement Wednesday that Seoul “welcomed” Kim’s meeting with Xi and that it hopes the visit will contribute to the denuclearization and establishment of peace on the Korean Peninsula.