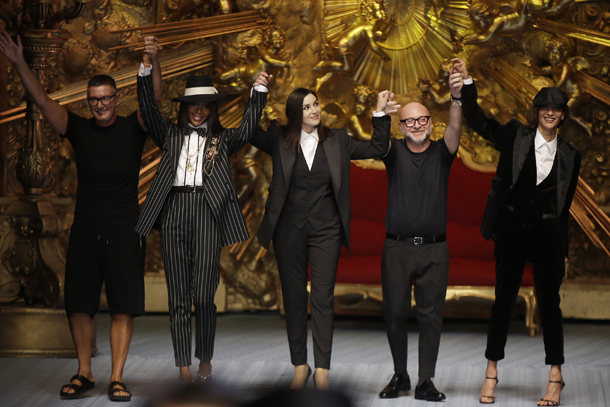 MILAN — Milan designers continue to cast their eyes toward millennials with a focus on street wear — but without giving up tailored luxury and innovations.

Menswear collections for next spring and summer were being shown Saturday during the second day of Milan Fashion Week. The focus is increasingly on elements that can play up into office looks or down into casual street wear, using the same basic building blocks.
It was bring on the bling at Dolce & Gabbana, where the designing duo explored the brand’s DNA with turns by some of the brand’s historic models — Naomi Campbell, Monica Bellucci and Marpessa Hennink — decked out in men’s suits.

Designers Domenico Dolce and Stefano Gabbana created menswear looks that ran the brand’s gamut from suits for daytime that were still tight-fitting and sexy, to glammed-up versions in bright sequins. There was loud beach and resort wear that featured colorful bursts of prints or black-and-white logo plays, and geek looks in sandals with socks and a beanie.

Elegant all-white suits and outfits had golden brocade touches, recalling Baroque churches in the duo’s beloved Sicily. And the northern Italy Milan DNA came through in a sleek muscle knit and black trousers.

To underscore the brand’s broad reach, the designers filled the runway with millennial influencers, real-world royals and aristocrats, singers and performers but also ordinary people: elderly women out for a stroll in bold primary prints, gay couples and a family with children.