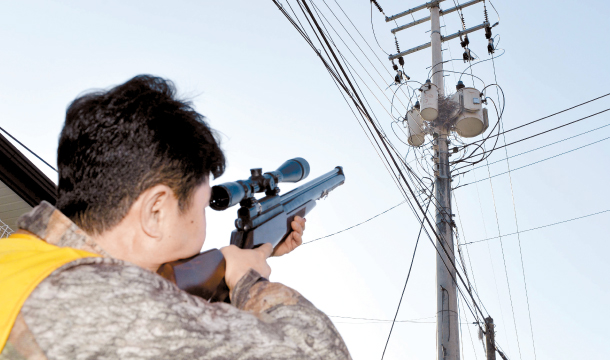 Magpie hunter Kim Jin-hwa takes aim at magpies perched on a utility pole with his air rifle Wednesday in Gongju, South Chungcheong. Since 2000, Korea’s largest utility company has been rewarding people for catching magpies, which are thought to be responsible for 20 to 30 power outages every year. [KIM SUNG-TAE]

Taking an air rifle out of his car, Kim walked up to a utility pole where three magpies were roosting. After carefully taking aim, Kim pulled the trigger and one of the birds dropped to the ground.

Kim shot over 2,400 magpies in just two months this winter, culling the birds as they began building their nests.

He’s not hunting for sport, however. After every hunt, Kim takes the black-and-white birds to the Gongju office of the Korea Electric Power Corporation (Kepco), where he receives 6,000 won ($5.30) for each magpie shot.

“I’ve made 10 million won every winter for about 15 years by hunting magpie,” said Kim. For the rest of the year, Kim is a small business owner.

Although they have traditionally been a symbol of good luck in Korea, Kepco and domestic bird experts singled out magpies as the species of bird most responsible for electrical outages.

Magpies like to build their nests on treetops to avoid snakes and other predators, but overpopulation has pushed growing numbers to make their home on top of utility poles.

The problem is that their nesting materials, which can include things like fragments of metal wire, can short electric circuits and cause power failures.

“If there’s a short circuit it’ll activate a protective device and cause a power failure,” said an official from Kepco’s Gongju office. “Electrical accidents can result in huge damages even in a short time period.”

Magpies can be very hard to catch, however, as they are one of the most intelligent bird species.

“Magpies have the intelligence of a four or five-year old child,” said Cho Sam-rae, a bird expert and honorary professor of biology at Kongju National University. “They remember the outfits of people who have tried to harm them and try to avoid them later on.”

Kim agreed that catching magpie is a tricky business.

“It’s not easy to catch the birds because they can identify the people that carry guns from their behavior,” Kim explained.

Hunting accidents do occur as well. In October 2017, a hunter in Incheon, Gyeonggi misfired and shot the window of a bus. No one was injured.

Despite Kepco’s best efforts to control the magpie population, some experts are skeptical of the effectiveness of the solution.

While the number of magpie hunters has grown in the past few years, bird-related power outages have not declined at a corresponding speed.

Animal rights activists have also argued killing birds does not solve the fundamental problem and that utility officials should find ways for people and wildlife to coexist.

For now, Kepco believes the hunt must go on.

“If we stop hunting magpies for just a year, they’ll overpopulate and electrical accidents will increase as well,” explained an official from the company. “We have no option but to have people hunt.”