After a week of back and forth and continued escalation, the fight between LG Chem and SK Innovation is going to the next level.

SK Innovation announced Friday that it is ready to take LG Chem “head on,” and warned its rival that it would take legal action as well if LG does not stop making “groundless claims.” 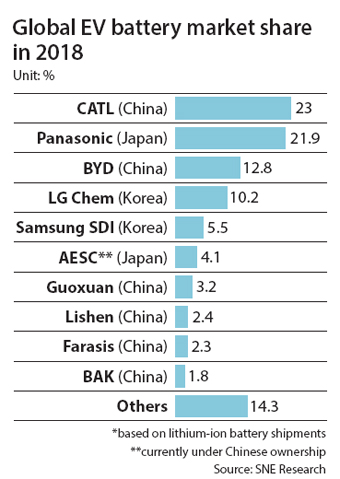 The two companies have been taking turns with accusations and counteraccusations since Monday after LG Chem, the country’s largest battery maker by shipments, said it was taking a complaint against SK Innovation to the U.S. International Trade Commission. It also announced that it would be suing the company in the U.S. District Court of Delaware.

“We don’t need the rival’s technology or trade secrets, because we have a different way of producing batteries, and our core technology is the world’s best,” the company said.

The company added that it has “never taken away key talents from LG and everyone moved out of their own free will.”

LG Chem earlier offered up SK’s application form - which asks for information about projects undertaken at previous employers, the duration of the work and names and the number of coworkers - as proof of attempted intellectual property theft.

SK Innovation on Friday said the form is intended for job applicants to “prove their eligibility” and that no new information was revealed.

“But if our competitor does not stop, we will take every possible measure, including legal action, to handle this issue seriously,” SK Innovation said in statement.

“It is a pity that local companies in this rapidly growing industry have to fight a legal battle,” Hwang Yu-sik, an analyst at NH Investment & Securities said in a note. “It seems like a strategy to defend electric car battery prices from falling and to lift up its battery performance.”

While the fight grows, competitors overseas are expanding their presence in the global electric car battery market.

On Thursday, France and Germany agreed to jointly invest in the European production of electric vehicle batteries. French Finance Minister Bruno Le Maire said a total of 5 to 6 billion euros ($5.58 billion to $6.7 billion) would be invested into the project, which is important for Europe to remain competitive in the field against major battery producing countries like China.

If the consortium ends up supplying batteries for European carmakers, it would be a major blow to Asian battery makers in Korea, China and Japan currently holding most of the battery market share.

Chinese companies are expanding their own battery production capacities.

Contemporary Amperex Technology (CATL), China’s largest electric car battery maker, is building a 240 million euro lithium-ion battery factory near Erfurt, Germany. The factory is expected to begin production in 2021 with an initial capacity of 14 gigawatt hours per year. According to recent reports on the factory, the capacity could be boosted to as much as 100 gigawatt hours.