Andaz hotel opens at Gangnam’s retail hub: The new Hyatt property blends with the trendy area in which it sits

Andaz hotel opens at Gangnam’s retail hub: The new Hyatt property blends with the trendy area in which it sits 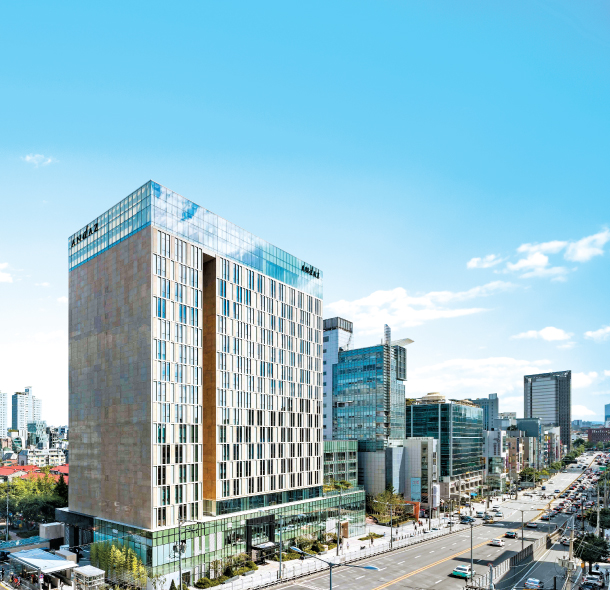 The facade of Andaz Seoul Gangnam, a newly opened hotel, in the heart of the shopping district. [ANDAZ SEOUL GANGNAM]

It wasn’t much of a lazy Sunday morning for those wanting to take a look around the first Andaz hotel in Korea. Andaz Seoul Gangnam, the luxury boutique hotel operated by the Hyatt, opened Friday in Gangnam District, southern Seoul, to cater better to those reacting fast to changing trends. Since there have not been any luxury hotel brands close to Gangnam’s Cheongdam-dong shopping mecca as well as Garosu-gil, where more street-casual and lifestyle brands dominate, more attention falls on what facilities and programs the new hotel offers.

Comfortable luxury is what the new hotel aims for, with the designs done by Netherlands-based Studio Piet Boon. While it is equipped with high-end facilities and services not seen at any other budget properties, the hotel tries to make it easy for anyone to come in and try out what the hotel has to offer. The street-level entrance doesn’t have any intimidating facade, so walk-ins naturally enter the space. The lobby and check-in area do not have a clear boundary and look more like a coffee shop with some sofas and artwork around. Instead of having people line up to check in, the staff approach casually to assist them while getting something to drink. The overall vibe makes it less awkward for non-overnight guests to linger.

“Luxurious comfort is the most important thing,” said Piet Boon, the designer during his visit for the opening. “Something comfortable so that guests feel like they want to go in for a drink and walk around a little bit is what we want.”

To give the visiting guests a little more sense of the place, the team and the hotel decided to make the first two floors of the hotel open, with the staircase in the middle making the connection. The second floor is filled with restaurants, a cafe and a bar with types of food one may find while wandering around the city to remind the visitors that they are in the heart of Seoul’s Gangnam district. Bottles of makgeolli, or Korean rice wine, and other Korean liquors are available besides wine and beer, and some of the dishes inspired by street food are available around the area, such as fish cakes. Fried kimchi rice made into arancini is one example of the fare. An afternoon tea set, with your choice of bites and drinks, is also available.

“As we came to Seoul many times, we saw many things we didn’t expect to see like restaurants and shops, and found ourselves smelling the food and going into some of the spots,” said Boon. “The first idea was to make the stairs so that the entire place can be very open and multi-functional, and easy to navigate without feeling like you have to have a certain dress code to enter.”

While the openness is to make the overall vibe at the luxury hotel less formal, the hotel made sure to have some separate rooms for food or other events for those who want more privacy. Large-size event halls can house as many as 400, although smaller venues are available, considering that many personal events like weddings in Korea are getting smaller in size. Two of the penthouses can also be turned into spots for private events.

On its third day of the opening on Sunday, many guests of all ages came in with their families to get their Sunday brunch and coffee, or even request to look around the places. One of the expected hot places is The Summer House underground where the swimming pool is located. To make the pool more outdoorsy, a large screen is set up to display different scenes of Seoul. The night view of the Han River shown on the screen would make one feel like they are out by the river, and the morning view of the sunrise would make one feel more refreshed. There are some larger sized sun beds ready, for an additional cost, to make the swimming and lounging more relaxing.

“You will get to experience lots of things Seoul has to offer at the hotel,” said Boon.

The hotel is connected to Apgujeong station, line No. 3 on exit 3, to make it even easier for visitors.

Besides the restaurants and bar it operates, it houses a branch of Blue Bottle Coffee, one of the trendy coffee spots in Korea, which originally came from the United States, in order to appeal to the hip and the young as well.

The hotel is adorned with many artworks and objects done by local artists and craftsmen, and some are available for sale.

Such traditional Korean design is also found at rooms thanks to Boon using themes inspired by bojagi, or wrapping cloths. The angles often seen in these cloths are used to make the floor design of room, which makes even the smallest room available at the hotel feel a bit more spacious.

Overnight guests on the promotional package will get 30 percent discounts at restaurants inside the hotel as well as late 3 p.m. checkout. The package can be booked through Sept. 30 for a stay no later than Dec. 20. All the existing Hyatt members who pay to stay at the newest addition in Seoul can accrue 500 points.

Andaz Seoul Gangnam opened Friday for business. To get there, go to Apgujeong station, line No. 3, exit 3. For more information, go to www.andazseoulgangnam.com or call (02) 2193-1234.