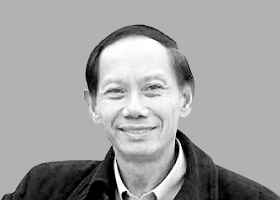 Viengkeo Souksavatdy
The author is deputy director general at Heritage Department of the Ministry of Information, Culture and Tourism in Laos.

Laos’s and Korea’s bilateral cooperation in the field of cultural heritage preservation started over five years ago and is steadily blossoming. This achievement not only strengthens the generous friendship and mutual understanding between the two nations but also safeguards the common global heritage as well as enhances tourism promotion at the international level.

Korea is among the potential partners to support the preservation of Laos’s tangible and intangible cultural heritage. The Korean Official Development Assistance (ODA) has provided an important contribution through various platforms including human resources capacity building, networking, technical training, workshops and the provision of heavy equipment for monumental restoration.

Vat Phou in Champasak was reputed as the cradle of the Holy Land inspired by Hindu cosmology, prevailing from the 5th to 12th centuries A.D. Many vestiges of the ancient settlement including city walls, and monuments made of brick and sandstone, formed a large landscape spread over nearly 400 square kilometers (154 square miles), occupying both banks of the Mekong River, centered on a sacred hill known since ancient times as Lingaparvata.

Since its inscription on the Unesco World Heritage list in 2001, there has been an urgent need to safeguard most of these ancient monuments. Under the patronage of Unesco, the international community has provided valuable technical assistance, especially France, India, Italy, Japan and Korea.

The Project for Conservation and Restoration of Hong Nang Sida was initiated in 2013, supported by the Korean government. During the pre-restoration feasibility studies, researchers unearthed many important discoveries which impressed all of us.

They included many key architectural and decorative elements as well as worship relics, some of which represented a masterpiece of the Vat Phou Site Museum collection. The newly discovered miniature snanadroni measures 63 millimeters (2.5 inches) in height and 76 millimeters in width on each side, with a spout exceeding 26 millimeters. It was cast in a single piece of bronze and has an outer gold-plated surface.

There are five small holes with a diameter of 3.5 millimeters on the top, but unfortunately, the upper part is missing. The snanadroni (ablution basin) is a Sanskrit term to specify a combination of Shiva linga erected on a pedestal.

The Shiva linga is a non-anthropomorphic form of the supreme Hindu god representing a cosmic pillar erected on the yoni of the goddess Shakti, the consort of Shiva. It forms a pedestal and ablution basin with a long spout on one side, always orientated to the north, for the flow of lustral water used in the ritual washing of the linga, which is destined to bring rain and fertility to the land.

The two symbols together represent the eternal process of creation and regeneration, the union of the male and female principles and the totality of all existence. Shiva is the supreme god among Brahma and Vishnu which form the Hindu Trimurti.

Despite its missing top part — the Shiva linga, which is usually erected on the top of the ablution platform — the circular central hole surrounded by four smaller holes is evidence of the presence of panchalinga or the five linga, which could have been made of precious objects and mounted separately.

According to Hinduism, the panchalinga symbolizes the quintuple prime elements of nature by each Shiva linga — earth, water, air, space and fire. The stylistic design of this artifact may date back to the pre-Angkorian period or over one thousand years ago.

The Project for Conservation and Restoration of the Hong Nang Sida Monument is located about 1 kilometer (0.62 miles) on the southern tip of the Vat Phou temple complex and stretches along the ancient royal road leading to Angkor Wat.

The upper structure of the Hong Nang Sida monument has completely collapsed, and a colossal mound of stone blocks has been buried for a long period of time, although its foundation seems to be fairly stable and holistic architectural elements supposedly remain under the ruins.

The first phase of the project spent about $7 million on technical feasibility studies, the training of personnel, provision of necessary facilities and equipment, creation of a stone hospital as well as partial anastylosis of the eastern part of the monument — Platform (Terrace) and Mandapa. The central part or cella is expected to be accomplished during the next phases.

The first phase of the Project for Conservation and Restoration of Hong Nang Sida Temple (2013-2019) is a pilot project which has contributed a very valuable output not only for monumental conservation but was also involved in supporting international coordination for Vat Phou, as well as knowledge transfer to Lao staff for their long-term professional practice.

In association with the program mentioned above, Korea funded projects via different Unesco-affiliated offices such as the International Information and Networking Centre for Intangible Cultural Heritage in the Asia-Pacific Region, Korean National Commission for Unesco and the Unesco regional office in Bangkok, which have effectively achieved significant outputs.

Some of the examples are the safeguarding of intangible cultural heritage in Vientiane and Luang Prabang in Laos and more recently the successful inscription of the Megalithic Jar Sites in Xieng Khouang Province in Laos on the Unesco World Heritage list.

The Lao people acknowledge the generous and valuable support from the people of Korea and highly esteem the great success of bilateral cultural cooperation between the two countries.

We do hope to maintain continuous support and step forward to the future stages of preserving our common heritage. Appreciation through wider tourism promotion to connect other world heritage destinations in the region and beyond will bring benefits for our peoples.