Josh Lindblom has left the building

Josh Lindblom has left the building 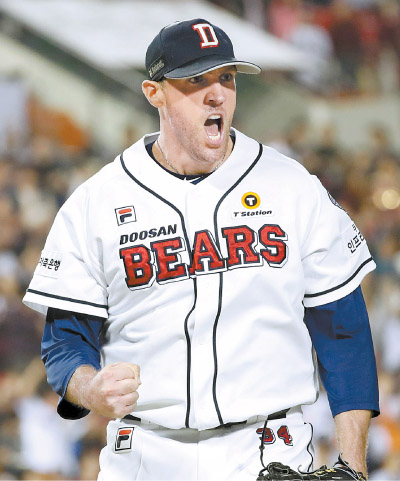 The Milwaukee Brewers signed a three-year contract with pitcher Lindblom on Wednesday. ESPN reported, “Lindblom’s contract will be for three years and guarantee $9.125 million, according to a source. With performance bonuses, it can max at more than $18 million.”

As Lindblom’s annual salary with the Doosan Bears this season was at $1.92 million, he will be making about 3.1 times more with his return to the majors.

Before Lindblom joined the KBO, he turned pro in the United States, drafted by the Los Angeles Dodgers in the second round of the 2008 MLB draft. After years of playing in minor league clubs, Lindblom finally made his major league debut with the Dodgers as a relief pitcher in 2011.

Lindblom was traded to the Philadelphia Phillies the following season. After making brief major league appearances with the Phillies, Lindblom once again switched clubs, joining the Texas Rangers and, before arriving in the KBO, he played for the Oakland Athletics and the Pittsburgh Pirates, mostly in the minor leagues.

By signing a contract with the Lotte Giants in December 2014, Lindblom finally made his way to Korea. Although he didn’t see much success as a starter in the United States, Lindblom proved a great addition to the Giants’ starting rotation.

The Giants hoped to re-sign Lindblom for a third straight season, but Lindblom decided to head back to the United States to spend more time with his daughter Monroe, who was diagnosed with a heart defect and underwent her first heart surgery in the United States.

Due to this, Lindblom made a short return to the majors by signing a minor league contract with the Pirates in December 2017. He wasn’t too successful as he was eventually released by the club in July 2017. Having spent most of the time in the minors, Lindblom appeared in only four games for the Pirates and gave up nine runs throughout 10 and one-third of an inning with a 7.84 ERA.

Lindblom returned to the KBO, playing the second half of the season for the Giants.

While Lindblom was evaluated as a good foreign pitcher for the KBO, he really started to improve over the past two seasons with the Bears. In 2018, Lindblom picked up 15 wins and four losses with a 2.88.

Things got even better this year - Lindblom picked up 20 wins and only three losses with a 2.50 ERA throughout 30 starts. Lindblom was the only pitcher to have picked up 20 wins this season and led the league in innings pitched at 192 and two-thirds of an inning and strikeouts, at 189.

Following the Bears’ victories in the regular season and the Korean Series, the Seoul club was keen to re-sign Lidblom, but instead he announced his decision to head back to the majors.

If things go well with the Brewers, Lindblom will be the third foreign player to make a successful return to the majors.

Eric Thames, formerly of the NC Dinos, was the first player to return to the majors after a successful career in the KBO. At the time, Thames signed a three-year contract with the Brewers at $16 million.

Currently, Thames is a free agent and hasn’t signed a contract.

Last year, the SK Wyverns’ Merrill Kelly made his return to the majors by signing a two-year contract with the Arizona Diamondbacks.

Kelly played four seasons in the KBO with the Wyverns. Throughout his time in Korea, he picked up 48 wins and 32 losses with a 3.86 ERA. In 2018, his last season in the KBO, Kelly successfully helped the Wyverns win the Korean Series title.

During his first season with the Diamondbacks, Kelly also met expectations, picking up 13 wins and 14 losses with a 4.42 ERA.

In addition to Lindblom, two KBO players have a shot at heading to the majors next season. Bears’ cleanup hitter Kim Jae-hwan and Wyverns’ starter Kim Kwang-hyun are currently trying to make their way to the big leagues through the posting system.