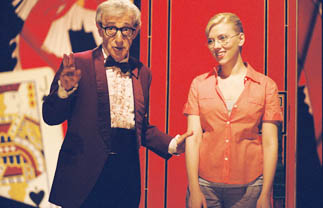 Woody Allen stars opposite Scarlett Johansson in ‘Scoop,’ but posing as her father. Allen has finally realized he’s no longer a romantic leading man.

“Scoop” is the second movie in a row Woody Allen has directed in London, which immediately makes one wonder ― is he cheating on New York? Allen has filmed outside New York City in the past, but it’s always been a fling here and there, never anything serious. They meant nothing to him, and he always went back to his faithful cinematic spouse.
But after 30 years of filming there, Allen’s long marriage to New York was showing signs of strain. Stinkers like “Curse of the Jade Scorpion” and “Anything Else” suggested that perhaps the passion that once existed between this man and his city was fading, or at least in a lull. Comedies that cast Allen in the leading role went from merely mediocre to cringe-worthy.
“Match Point” was a thrilling return to form for Allen ― a tightly plotted theatrical thriller with a startling ending. No jokes, no on-screen part for Allen, no New York. Now, in “Scoop,” the jokes and self-insertion are back, but Manhattan isn’t, and to make matters worse, the film is even more enjoyable than “Match Point.” London has made Woody Allen funny again! Truly, this is a city of miracles.
In “Scoop” Sondra Pransky (Scarlett Johansson), a college journalist with big plans, and Sid Waterman (Woody Allen), a corny kids’ magician, receive a visit from the ghost of a dead reporter (Ian McShane). The ghost puts them on the trail of a prominent lord’s son, Peter Lyman (Hugh Jackman), for the murder of a prostitute. To get close to him the two go undercover as a California oil baron and his actress daughter.
At first Sid is skeptical, but naturally as soon as he’s convinced, Sondra falls for Peter and the roles are reversed.
Allen and Johansson are absolutely delightful together. Johansson plays the nervous young would-be investigative reporter very endearingly, with a nerdy snort of a laugh, big round glasses and lots of very tongue-in-cheek gags. And now that the spotlight’s off him, Allen is funnier than he’s been in years as the film’s peanut gallery.
For example, his response when Sondra says Peter might propose: “You come from an Orthodox family. Would they accept a, you know, serial killer?” (That joke did fly over the heads of a theater full of Koreans, I got the distinct sense I was the only one who knew what an Orthodox Jew was, much less had ever seen or met one.)
Just as in “Match Point,” London is lovingly shot, though the locations this time around are a bit more upscale ― a private club, a countryside estate, etc.
As with any more recent Woody Allen film, this is less an experimental comedy and more a typical, if solid, drama. Watching Sid nervously performing his magic tricks suggests Allen’s anxiety as a filmmaker. The showman is still doing the same old tricks. The question is whether they still make you smile.
So what of Allen’s cinematic marital woes? At one point in the film, Sondra asks Sid if he could ever live in London, and it seems for a moment Allen is answering, and the answer is no. He cites the language barrier and how terrifying it is to drive on the wrong side of the road. Don’t worry, Woody. She’s a tough old metropolis. New York will understand.