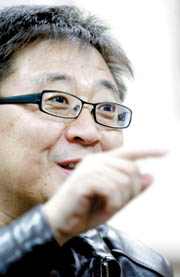 The 57th Berlin International Film Festival, which ended Sunday, selected two Korean films for their official competition. One was Park Chan-wook’s “I’m A Cyborg, But That’s OK.” The other was a co-production that involved Korea, Mongolia and France and was titled “Hyazgar” (“Desert Dream”).
The film, which was shot in Mongolia, delves into the relationship between a young woman and her son. They have settled in a rural village on the border between China and Mongolia, after defecting from North Korea. The third character is a man who plants trees in the desert and develops a relationship with the woman.
“Hyazgar” was directed by Zhang Lu, 45, a third-generation Korean-Chinese director whose debut was the award winning film “Grain in Ear,” which was also the story of an ethnic Korean with a little son who carries on a relationship with a stranger out of desperation. The following is an interview with the director.

Q. The names of the young mother and her son in the film “Hyazgar” are the same as in your film “Grain in Ear.” They also share other things in common. For example, both children have lost a father. Why did you do that?
A. I didn’t want the stress of finding a new name. The fact that I delve into the lives of single mothers is because of my personal experience. My mother took all her children to live in the countryside when I was about five or six. That’s what happened to most families after the fathers were thrown in prison during the Cultural Revolution. We settled in a village with almost no ethnic Koreans and no electricity. My mother had a really hard time during this period.

I am curious how you began a story about North Korean defectors.
My hometown is Yanbian, in China. I still go there for my holidays, and I hear a lot of painful stories. My film is not a political film. I have no insights about the North Korean system, whether it’s them or the U.S. who are doing the right thing. In my new film the characters have escaped North Korea before the film begins. I wanted to make a film about people who have left their homes. In Mongolia the prairies are turning into deserts, and the North Korean defectors undergo a similar process in their minds after they leave home. That’s why I shot this film differently from the style of “Grain in Ear.” People who take refuge away from their homes are different from ordinary people. To depict their emotional state I used a handheld technique.

In both of your films your interest seems to be focused on people who live on the edge. That may have to do with your identity as a third generation Korean-Chinese.
“Hyazgar” means “boundary” in Mongol. Nations have boundaries and so do people’s minds. Korea is my grandfather’s home, but my visits here are never easy. I have to renew my visa every time I come. When I get to Berlin the first thing I want to see is the remains of the wall. I want to know if the walls inside people have also been taken down and whether there are new walls replacing the old. My new film began with my feelings about a mother who leaves home, but the story is ultimately about “a boundary.” Once the boundaries are diminished, minds can connect. A film, after all, is about states of mind.

Was it difficult to shoot the film in Mongolia. The place is dry and their sand storms are severe.
I said to myself that I would never shoot a film in Mongolia again, ever. The first time, I took one bath during the two months I was there. I didn’t smell that much, because of the wind. I was touched by the sincerity and innocence of its people, that’s what drew me back.

What was your impression when you were invited to Berlin?
It’s just a pleasure that the film is being screened. When I go home people ask me whether I’ve been to the Grand Bell Prize ceremony [Korea’s version of the Oscars]. I would much prefer this film to be seen by more Koreans than to get attention in other countries. I wouldn’t care about the prize, but I would be happy if the film was nominated for the Grand Bell. I am just thankful to the film’s producers for their courage, given the current reality of the Korean film industry.

You were a professor of Chinese literature at Yanbian University before your directorial debut. You also published a novel under a pen name.
It’s an odd story. I tell people that I got divorced from literature and married the cinema. In other words, I met a new woman and it’s not polite to talk about my old lover.