Musical ‘Run Hany’ will race its way into your heart

Musical ‘Run Hany’ will race its way into your heart 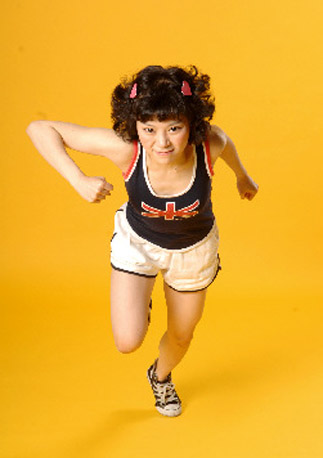 A theme song from a popular animated series can take on a life of its own, especially when it comes with a cheery (or silly) chorus that repeats itself. Eventually, you find yourself nodding along whether you like it or not. If the cartoon is one that was popular in your childhood, the song is sure to elicit nostalgic smiles.
The theme song from “Run Hany,” a 1988-animated TV series adapted from Lee Jin-ju’s comic book, is a case in point. When the skinny seventh grader Hany stood on the track, the song, “You go run, run, run, Hany, Hany!” played in the background and gave you an embarrassing urge to run also.
“Run Hany” will become a musical later this month. There won’t be enough space on stage for actors to actually run, but it is certain you will be whistling the familiar tune when see the actress playing the short-haired, big-eyed Hany, Lee Chan-mi.
“Everyone loved Hany,” said Kim A-rim, a marketer from the Seoul Metropolitan Musical Theatre, the company staging the musical. “It was a common story in the 1980s.”
“Run Hany” is about a motherless girl who lives alone on an apartment’s rooftop. Her father has a construction job in the Middle East, and Hany has no interest in school or making friends until she meets Hong Du-kke, a new (and wacky) track and field coach who tells her she has running ability.
Hany has to compete with Na Ye-ri, a tall, beautiful, rich track star who bought Hany’s old house after her mother died. Hany’s antagonism toward Na becomes the energy for her to run faster. 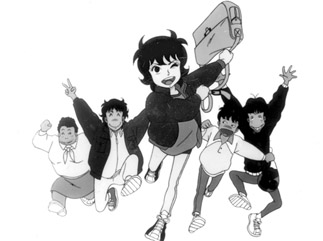 A clip from the original animation “Run Hany.”

Hong is a good-natured man who helps Hany feed herself, despite the fact that all he can afford to wear everyday are sweatpants. Hong is also stalked by a girl from the countryside who comes to Seoul just to marry him, and there is a boy who secretly admires Hany’s big dark eyes.
According to the theater company, Hong is a humble, friendly uncle figure, and the country girl represents all the innocent girls who came to Seoul searching for jobs when Korea was developing.
“It’s a story that people can easily feel sympathy with,” Kim said. “We made the musical ‘Run Hany’ into a more touching family drama by capturing the pressing moments on the race track with music and special effects.”