Singing to the gods about violence and love

Singing to the gods about violence and love 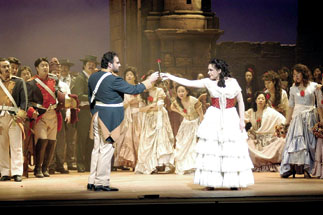 “Carmen” will be performed at the Seoul Arts Center in November 2007.

Thunderous applause echoed around Seoul Arts Center’s opera house last Saturday as Yang Su-hwa, the director of the Gloria Opera Company, took the stage. She was dressed in a bright pink hanbok and her traditional clothing provided a sharp contrast to the 19th-century European costumes worn by the cast of “La Traviata,” which had just been performed to a packed house.
Guiseppe Verdi’s melodramatic opera, based on Alexandre Dumas’s novel “La Dame aux Camelias,” was the latest production masterminded by Yang and it was performed to celebrate the 17th anniversary of the Gloria Opera.
The chorus of “Bravo!” echoing around the opera house suggested that the audience was thrilled, despite some rather poorly-designed sets ― the one used for the casino scene seemed like a down-at-heel joint in Atlantic City rather than Monte Carlo, the latter being the kind of image that Verdi had in mind.
Yang had, apparently, decided to invest most of her resources in the performers, and that’s not a bad choice. Better a rich soprano and a shabby set than a diva with a cracked voice, struggling to hit her high notes against a million-dollar backdrop.
In other words, the Gloria Opera Company knows its audience.
“Koreans enjoy the performances of Verdi,” said Yang. “His tragedies bring out their emotions.”
Opera afficionados in Seoul appreciate the quality of vocal performance above all else. And the numbers of fans who are prepared to pay high prices for the privilege of hearing world-class performers is growing fast.
“People have more leisure time and they are looking for unusual things to do,” said Yang. “That’s one reason there are more and more opera fans every year.” 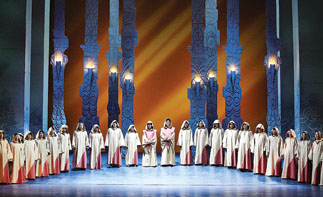 “The Magic Flute” will be perfomed in July at the Seoul Art Center’s Towol Theater.

This is going to be a bumper year for opera and, since March, fans of Verdi have been able to enjoy three of his best-loved works. Apart from the Gloria’s “La Traviata,” the National Opera of Korea staged a vibrant production of “Aida” in March at the SAC. Last month the Sejong Center for the Performing Arts began its season with an excellent “Rigoletto,” by the Seoul Metropolitan Opera.
Later this year the Sejong Center will host another version of “La Traviata,” performed by the Korea Opera Group, which this weekend presents “Rinaldo” at the SAC. George Frideric Handel’s 18th-century opera is being staged in Korea for the first time and it will be directed by Pier Luigi Pizzi from La Scala in Milan. Pizzi plans to work with the Korea Opera Group until 2009, staging two operas every year. Each one will feature a mix of Korean and Western performers. His commitment to opera in Korea is a clear sign that this quintessentially European art form has established a grip on the country’s imagination.
“The performing arts are supposed to make life beautiful,” said Pizzi at a recent SAC press conference. “Baroque operas like ‘Rinaldo’ serve this end because their stories stimulate the emotions of the audience. ”
Ten years ago, when the Asian economic crisis hit Korea, life was not so beautiful. People were more worried about where their next meal would come from, rather than the intracacies of plot that, for example, lead the central character in “Rigoletto” to accidentally arrange for the murder of his own daughter. And opera is expensive, both to stage and to watch. Tickets for “Rinaldo” range from 30,000 won ($33) to 330,000 won. Nevertheless, Korea’s 7 opera companies survived and are now experiencing some of their strongest sales ever.
Opera was brought to Korea by Lee In-seon. In 1934 he fled Japanese colonial rule by jumping on a boat bound for Italy. The intrepid Lee had already qualified as a doctor at Severance Medical school but his dream was to become a tenor, the highest natural adult male singing voice ― in most operas, the tenor plays the hero, although the villainous Duke of Mantua in “Rigoletto” and the devious Lieutenant Pinkerton in “Madame Butterfly” are exceptions. 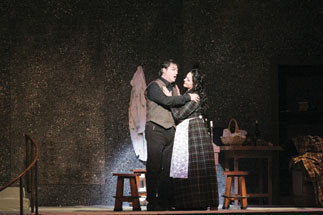 La Boheme, will be performed in Devcember at the the Seoul Arts Center. [JoongAng Ilbo]

Lee studied opera in Italy and returned, a practiced performer, to launch Gukjae Operasa (the International Opera Company) in Seoul. In 1948 his company performed “La Traviata” at the National Theater of Korea, in Myeong-dong. It was the first time that a full- scale opera had been performed here. Lee played Giorgio Germont and Kim Ja-kyoung played Violetta, the doomed consumptive.
As a result of Lee’s efforts, opera took hold in Korea to a greater extent than anywhere else in Asia. When the SAC opened its Opera Theater in 1993, the 2,300 seat venue was the first and only opera house in the region, a distinction it retains today.
SAC’s decision to build the Opera Theater has been rewarded with an audience that has grown steadily. In its opening year the SAC hosted nine operas but reduced that number to one in 1994 so they could show more ballet and modern dance. The numbers rose again from there and, in 2005, seven operas were performed. Last year the SAC hosted ten operas with an attendance of 68,810, and three of those were its own productions. It estimates that an opera is a commercial success if 60 percent of the tickets are sold but that has become more challenging as audiences have grown more sophisticated.
“It’s been 60 years since the art form was introduced to Korea and since then there have been many performances of the most popular operas,” said Park Ki-hyun of the Korea Opera Group. “Opera fans and critics in the media are looking for new works. That’s why we decided to stage Rinaldo. It’s the first time in Korean opera history that a major opera from the Baroque period has been performed.”
Park acknowledged that casting the right stars is a key factor for the success of any opera, in both artistic and commercial terms. She also wants to make sure that Korean opera fans spend their money on live opera, in Seoul.
“The opera audience grew because people bought opera DVDs and saw performances overseas,” she said. “This gives us a greater responsibility to stage works that satisfy the public. And our job is to bring in good operas at a reasonable price so that people don’t spend their opera budget on CDs or in Milan.”
Opera directors also pay close attention to the key factors that determine the taste of their target audience.
“In the late 1990s the popularity of Opera began to decline,” said Huh Lan-young, the director of the Seoul Metropolitan Opera Company, which will offer Verdi’s “Un Ballo in Maschera” in November. “In order to survive, opera companies had to find works that would attract an audience. We introduced subtitles in Korean and did lots of marketing. And we staged operas with familiar aria.”
This is a strategy that has guaranteed frequent performances of old favorites like “Rigoletto,” with its beloved canzone, “La donna e mobile,” “La Traviata” (for Violetta’s aria “Addio del passato”) and “Aida” (for the “Gloria all’Egitto” march) ― and it was a factor in the decision to perform “Rinaldo” because it features “Lascia ch’io pianga” an aria made popular among Koreans by the 1994 film “Farinelli the Castrato.”

However, Park said that the most compelling marketing ploy is to get people to come and see their first opera.
“Those who have seen one become fans,” she said. “That’s why people are beginning to give opera tickets as presents.”
Maybe that’s because, in these turbulent times, they appreciate the essence of the art form. As the American jazz giant Cab Calloway put it, “Two things happen in opera, violence and love ― there’s nothing else.”
danielj@joongang.co.kr

The gods The seats furthest from the stage in any opera house. This is where the die-hard fans sit and, at La Scala in Milan, judge performers with loud boos or bravos.
Aria A solo, in which the melody is very clear, performed together with instruments. “Ah Perfido!” by Beethoven is an example.
Basso buffo A bass voice that is used by comic characters. Dr. Bartolo in Rossini’s “The Barber of Seville” is an example.
Canzone An Italian song or ballad. The aria “Voi Che Sapete” from Mozart’s “Marriage of Figaro” is an example.
Messa di voce An Italian phrase meaning, “placing the voice.” It is both a vocal and instrumental technique. A note is performed very quietly at first, then more loudly, and then softly again.
Mezzo-soprano A woman’s voice ranging between soprano and contralto (the lowest female voice).
Vibrato A musical effect that emphasizes feelings and expression in a story.