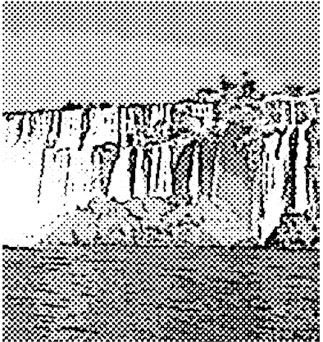 Looking at the Lushan Waterfalls, Chinese poet Li Bai wrote, “Three thousand feet of sparkling water, the Milky Way pouring down from heaven.”
Today, the 3,000 feet mentioned in the poem equals more than 900 meters. During Li Bai’s time, one foot equaled 24.5 centimeters ― which means the fall would have been higher than 700 meters. However, the fall’s real height is just above 100 meters. Still, Li Bai’s description was not an exaggeration. His mesmerization with waterfalls was understandable.
Angel Falls in Venezuela is the highest waterfall on Earth, at 979 meters. It is higher than 3,000 feet, but the Iguazu Falls, Niagara Falls and Victoria Falls are considered the three greatest falls on Earth. Iguazu Falls is the biggest; it consists of about 270 falls spread across 4 kilometers (2.5 miles). The individual falls measure between 60 and 80 meters. In the first scene of the movie “The Mission” (1986), a priest tied to a cross drops from the Iguazu Falls. Iguazu comes from the Guarani words y (water) and guasu (big). Robert De Niro and Jeremy Irons played priests who conduct missionary work with the Guarani Indians.
Legends say it was originally just a river. A big and monstrous serpent named Boi lived in the Iguazu River. The Guaranies had to sacrifice a beautiful maid as an offering to Boi by throwing her in the river; they selected Naipi. But Naipi was in love with the leader of the tribe, Taroba. When the ceremony was finished and everybody was asleep, the two lovers fled in a canoe. In rage, the god severed the river and created the waterfalls, condemning the lovers to fall eternally. That’s how the Iguazu Falls came into being.
Twenty-one auditors from state-run corporations and public companies left to hold a reform seminar at one of the greatest tourist spots in the world, on the border between Argentina and Brazil, but they returned when public opinion turned sour on the idea. The Presidential Committee on Balanced National Development wanted to hold a seminar at this place, too. Perhaps they thought ideas would magically pour out like a waterfall when they were there.
During the Fifth Republic, when politics and the economy were closely tied together, a politician told reporters, “This is one drop in the waterfall compared to the amount of political funds.” Is this what the auditors who waste public funds are thinking? They were people who worked in the local chapters during the presidential campaigns; considering their astronomical annual salaries, it raises questions about how much the president’s diehard supporters are making.