Vision may fade, but not love for his craft

Vision may fade, but not love for his craft 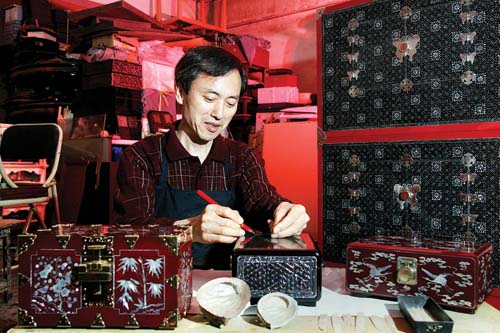 23rd in the series | Laquered Wood Inlaid with Mother of Pearl
Jung Myung-che began to loose his near-sighted vision in his early 40s.
By 44, he had to push his drawing to the far edge of his desk in order to see them in fine detail.
It was a natural result of his craft.
Now 58, he is a master of najeon chilgi, an extremely intricate Korean craft that involves decorating lacquered wood with mother of pearl.
On a recent afternoon, his eyes quickly turned red as he rubbed the surface of his lush black table with sandpaper.
The table was decorated with golden prints, a design inspired from a swallowtale.
His carving knife moved from dot to dot, line to line.
“The rays from pearls blind my eyes sometimes,” he said. “But that’s a moment of complete rest for me. I forget about other things and stay in the presence of that moment.”
Jung, who in 2004 was named an intangible asset by the Seoul Government, became the field’s top expert shortly after he got out of high school in 1968.
The first najeon chilgi he saw was a tiny comb box for his friend’s mother.
“It was the purest form of jewellery that I’ve ever seen,” he said. “Immediately I was drawn into it.”
During inlaying techniques, he follows a highly meticulous procedure.
The shells are carved into a thin layer of sheets and threads. Then they are cut and applied to a lacquered wood.
The technique of najeon chilgi is of two types.
Jureumjil, or “filing,” is one type. Ggeuneumjil, or “cutting,” is another.
In the first method, shapes in mother of pearl are cut with scissors and carefully inlaid onto a finished wood surface.
In “Ggeuneumjil,” an earlier method that dates back a century, an artisan uses a sharp metal tool to cut mother of pearls into thin strips and paste them onto the wood one by one to create a shape.
Even today masters of najeon chilgi work in two genres.
Jung is an expert in Ggeuneumjil, which is considered relatively easy.
In reality, though, Ggeuneumjil is an extremely laborious procedure, which experts compare to a silk embroidery.
It takes an average of three to six months for Jung to work on a single piece of furniture, such as a cabinet.
In Ggeuneumjil, the mother of pearls are scooped out of the avalon shells, then pressed with a hot iron to make a flat sheet.
Then they are soaked in water mixed with vinegar for a few days to prevent cracking.
In keeping with tradition, most artisans work with avalon shells with crushed gold.
These days they’ve also become inventive, adding finely crushed egg shells.
The use of mother of pearl have become more inclusive as well.
In Japan, a Korean artisan covered an entire wall of a hallway, bathroom and an elevator of a hotel with mother of pearl.
They are bold applications of traditional cabinets, vessels, tables and jewellery boxes made of mother of pearl, which were common dowry items among wealthy families in Korea in the 1960s and 1970s.
“Korea excels in its tradition of najeon chilgi compared to other countries in Asia,” said Jeong Hye-jo, a professor of Pai Chai University, one of the first institutions in Korea to open an independent department in najeon chilgi.
“But as the western style of living reduced demand for the products, many artists fled to Japan or turned to other jobs.”
A recent exhibit of Korean lacquer wares at the National Museum of Korea provided a historical showcase for the sometimes overlooked art form.
The show provided a rare glimpse into the world of laquered wood inlaid with mother of pearl. 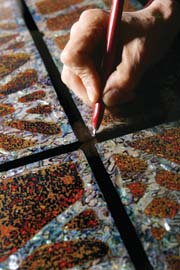 Dating back to the Goryeo Dynasty, the items in the museum’s glass cases included royal daggers with lacquered sheaths, pillows, mirrors and a queen’s headrest framed in gold.
The material used for the ornaments ranged from shells of avalons to other sea creatures, like clam and turtle shells, inlaid with lush paintings of deer and extravagant symbols of wealth and luxury.
Gwak Dae-woon, an expert of Korean cultural assets, describes najeon chilgi as “an ethnic craft.”
“To say that a single form of craft has lasted more than 1,000 years in a country means that it was well-suited to the sentiment of its people,” he said.
“It’s an ethnic tradition they practiced. And they fostered the material and creative technique they needed to preserve their cultural heritage.”
Historical records from the Ming Dynasty document that pearl lacquer ware had been offered to royal households in China by Korean authorities.
The tradition still runs strong in the modern customs of royal families.
Najeon chilgi are common gifts to kings and presidents from the Blue House whenever there are national summits.
Jung was commissioned to produce a number of cabinets and jewellery boxes as gifts to Prince Charles, Juan Carlos, the Spanish emperor, and the king of the Arab Emirates by former Korean presidents and ministers on their visits abroad.
But beauty aside, najeon chilgi is a craft of practicality.
Otchil, a natural varnish from lacquer trees that’s used to coat the wood, is referred to as “a mystical paint,” because it is chemical free and prevents food from decaying when made into containers.
“To be accurate, otchil is not a paint,” he said. “Every paint comes off or fades after a certain time. But otchil maintains the same gloss and tint. It is timeless.”
History substantiates that.
Historians note that a famous collection of Buddhist scriptures in woodblocks stored in Korea’s Haein Temple were able to maintain their shape 800 years after its production, because they were coated with otchil varnish.
In 1998, when a wooden vessel from the 1st century B.C was discovered without any trace of decay in Daho Township in South Gyeongsang, archeologists found that there was a lacquer varnish coating the wood. It controlled decay from the moisture in the soil.
As for Jung, he often finds that there is an increasing gap between modern art and traditional craft.
Local craft is slowly dying out in Korea. But Western art is a soaring investment in auction houses.
“I sometimes feel that I made the wrong decision at my friend’s house 40 years ago,” he said.
“But the pleasure it gives makes me want to continue until I see them.”