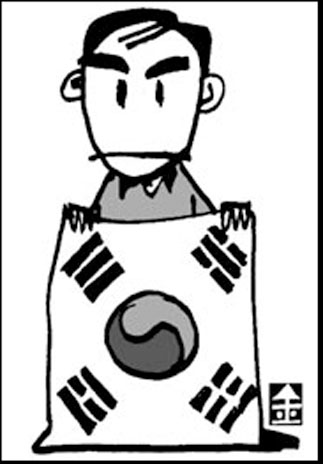 The military regime that seized power in the May 16, 1961 coup d’etat took a few things from the democratic movement of April 19, 1960. One of them was the campaign to use Korean products. University students, together with civic groups such as the National Enlightenment Front, joined those campaigns. They even burned thousands of imported cigarette boxes in Gwanghwamun, central Seoul.
That campaign was the 1960s version of the original buy-Korean products campaign that started during Japanese colonial rule. It developed spontaneously among people who believed they should consume more Korean products, even though the quality was poor, to build up the country’s economy.
The Park Chung Hee regime, which installed itself after the May 16 coup, enforced the spontaneous campaign. It was a time when a high-profile official had to resign because imported cigarettes were discovered hidden in his bureau.
Perhaps because of this experience, older generations have made strong appeals to patriotism in marketing. Immediately after the 1997 financial crisis, a Korean-made cola drink spurred “Coke Independence Day Aug. 15,” referring to the national independence day of Korea. It gained sweeping popularity for a while. A nationwide campaign to collect gold from households also spread like wildfire, intended to increase the foreign currency reserves of Korea. A private equity company made a big hit with its “Buy Korea” products, which were allegedly meant to revive the national’s capital market.
The film “D-War,” which got a cold reception from critics, sold a record 3 million tickets within six days. This rekindled an old debate on patriotic marketing.
Patriotism must be a universal virtue, but at the same time it receives sarcasm. As Samuel Johnson said, it is the last resort of scoundrels.
This is because there is a seed of division and conflict that is innate in the emphasis of “us” in nationalism.
The Institute of National Archives recorded several phenomena that represent our modern history: the use of Korean products, the mixing of barley with rice for the main dish and proscribing the miniskirts and long hair.
They plan to include them in a book hypothetically named “A History of Life, Seen from Recor ds.”
A movie’s value should be based on its accomplishments in the genre and a strong plot. The level of debate on national products, which is now fading away like a stuffed animal, seems to lack in the content department.