In smoking war, you must keep quitting

In smoking war, you must keep quitting 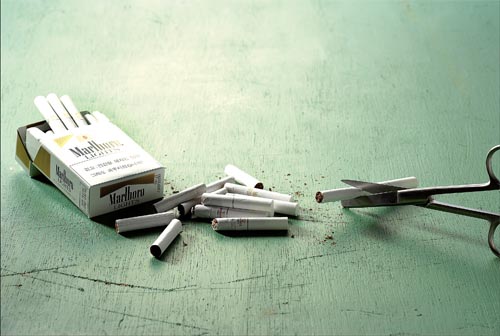 Many Korean smokers tried to quit as a New Year’s resolution. But after several days or weeks many go back to the habit. [JoongAng Ilbo]

Problem drinkers often say quitting smoking is harder than putting the plug in the jug.
Smoking is addictive on multiple levels: youthful bonding, James Dean cool, sex appeal, the lonely man’s campfire. On some level the slow suicide of inhaling fire and smoke is a defiance of death.
Ex-smokers often say they had to take an attitude of total war against the habit, using support groups, patches, gimmicks and every therapy known to man. Most importantly, they kept starting over ― again and again and again. Like alcohol, which works like a stimulant in small amounts and a sedative in large amounts, nicotine affects feelings, working simulaneously as a doubly addictive mood lifter and tranquilizer.
A crackdown on smoking has spread across the globe, including Ireland, New York and even Paris, where smoking was in vogue until recently. Even Korea has taken steps this year to tighten the grip on smokers, particularly in public areas. Inch by inch smokers are loosing ground.
Anyone who has ever tried quitting, however, will confess that it is not easy.
Yang Seung-hyeop, who has smoked for more than 15 years, said he has tried numerous times, mostly as a New Year’s resolution.
“Every year I always end up smoking,” Yang said. The 32-year-old first started smoking when he was in high school with a couple of friends.
“We were young and we were just curious about the experience,” Yang said. “You know, being cool and smoking kind of strengthened the bond among boys.”
After more than a decade of inhaling tar and nicotine, Yang felt unhealthy and wanted to quit. “There was this one time when I was on a trip with my friend,” Yang said. “The bus that we were on stopped at a highway rest stop. While taking a 10-minute break we found this machine that purportedly measued our sexual capacity (based on lung capacity) for 500 won. We thought it would be fun and we did it. We really didn’t think the machine was accurate or anything, but it showed that our sexual capacities were below average,” Yang said. “We both decided to quit smoking, but that didn’t last long.”
Yang said the biggest factor that worked against him was his social life. “It’s not like my friends were pressuring me to light up, but it’s not easy when so many people around you smoke, especially during a social gathering when everyone is drinking,” Yang said.
Yang is not the only Korean trying to fight nicotine addiction.
In an April 2007 survey by Pfizer, only 18 percent in a pool of 201 men over 20 succeeded in quitting smoking. The rest, who made resolutions at the beginning of 2007 to get off nicotine permanently, have gone back to cigarettes.
The most successful age group was men in their 40s, where 24 percent of the former smokers kicked the habit. The least successful group was those in their 20s, with only 14 percent finally quitting.
The study showed that 57 percent of men relapsed within a week, while 71 percent went back to smoking within two weeks.
The majority, or 52 percent, said they couldn’t resist the temptation. The surrounding environment was the reason 32 percent gave. Seven percent said they fell off the wagon because of uncomfortable side effects due to lack of nicotine in their bloodstream.
Although 70 percent of the pool tried to quit, only 16 percent lasted. Another 27 percent used anti-smoking supplements, such as a nicotine patch, while 20 percent used oriental medicine treatment. Only 20 percent succeeded.
Of 164 people who failed earlier this year, 2 percent are trying again. Among the remaining 98 percent, 93 percent intend to quit later. 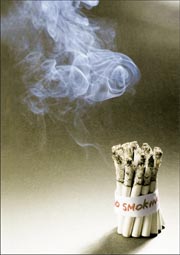 According to the National Statistics Office, there are approximately 11 million smokers in Korea, or 23 percent of the nation’s total population.
“There are two ways to quit smoking,” said Lee Bok-gun, an official at the Korean Association of Smoking and Health. “But there are no exact answers on the way to quit.
“However, we suggest two methods. One is using anti-smoking medication, including certified pills, anti-smoking gum and a nicotine patch. The other is a method that monitors the behavior of the quitter and provides guidelines, such as getting up early in the morning, eating a lot of vegetables, working out and taking deep breaths that help the person get through the addiction,” Lee said. “The behavior monitor guideline has been in practiced in the United States since the 1950s.”
Lee said the association does not advise the use of geumyeoncho, an alternative cigarette made of herbs. Some geumyeoncho are made of ginkgo leaf and the most common substance is wormwood. Geumyeoncho is easily found at convenience stores or drugstores.
Nonsmokinglife, an online anti-smoking company, offers 220 geumyeoncho, along with anti-smoking products, for 89,000 won ($97).
“The reason we’re not recommending the use of geumyeoncho is because there are no safety standards,” Lee said. “Although there is no nicotine in the alternative cigarettes, there is a small amount of tar that can cause cancer.”
One method that many Koreans have tried is anti-smoking acupuncture.
Oriental medicine doctors place anti-smoking needles on patients’ ears.
“We use a small needle attached to a sticker that is placed on the ears,” said Lee Sang-hoon, who works at the Dongducheon Public Health Center.
Other Oriental medicine clinics uses longer needles. Lee and another Oriental medicine doctors are now conducting a non-smoking campaign, where those trying to quit receive a free treatment. The campaign runs until the end of this month.
Has it been successful? It depends.
“Some say it works and others say it doesn’t,” Lee said. “Some quit just by getting the acupuncture, but it works best to get the acupuncture with other help, like a nicotine patch or medication.”
Lee also advises therapy.
“Former smokers feel anxious and depressed when they stop smoking,” Lee said. “To keep them emotionally stable, therapy is suggested.”
The use of longer needles is more effective for short-term effects. “The longer needle has a larger stimulus that will kill the craving, but since the needle is placed on the ear for only 20 minutes, the effect wears off more quickly.”
How long does it take to completely quit? Lee said it varies from clinic to clinic but usually it takes about three months.
“There are clinics that treat patients for six months,” Lee said.
Why are the needles placed on the ear? “There are other parts of the body where acupuncture helps reduce the urge, but since smoking is a mental issue, we penetrate the ear, where all of the important organs connected to a person’s mentality are concentrated,” Lee said.
Lee said he quit smoking a month ago using his own willpower.
Some people try hypnosis. The Red Sun Clinic offers hypnosis help for smokers.
It takes at least 10 treatments to quit, according to Park Joo-yeun, a therapist at the clinic.
“There is no pain involved and no danger,” Park said. “We first put the paitent in a stable state and alter the subconscious. Every time a patient tries to lift a cigarette, they feel as if their hands are heavy or the smell from the cigarette is repulsive.”
All of these options are not an exact science. There may be no shortcuts to the discomfort.
“All in all the best way to win is not what you use but a person’s own will,” Lee said.
“Some people just quit without any preparation or warning after 40 years of smoking when they feel they should.”
Lee said the number of people quitting has been increasing, but today’s youth face a big problem.
“When I was growing up, three or four of us would share a butt, but today it is easy to find teenagers smoking a pack on their own while playing video games at a PC room,” Lee said.
He said anti-smoking lectures at schools are not effective.
Additionally, Lee said cigarette companies are cunning marketers.
“If you look at the packages, the designs are hip and appeal strongly to the young generation and women,” Lee said.
“With a small investment they can secure buyers who may be loyal to them for three or four decades,” Lee added.
“When those smokers reach their 40s they realize it is not good for their health and their family. But it could be too late by then.”