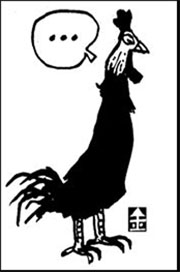 One of my Chinese friends always keeps in mind the term “wooden rooster.” Being a wooden rooster means staying calm whatever happens, especially when sensitive issues arise.
A story recorded in the book Zhuangzi says the following: Gi-sung was considered the greatest expert at cockfighting. A king of the Zhou state indulged in cockfighting and raised gamecocks himself. Gi-sung was called to the court to breed the cocks, but he never seemed to worry. Ten days later the king asked Gi-sung if the cocks were ready. The easy-going fellow only gave a sullen answer. He said the cocks were far from being ready, because they were so arrogant that they believed too much in their power.
Time after time, the king sought answers from the cockfighting expert, only to receive similar retorts. Gi-sung would say “the cocks picked fights with other roosters,” or “the cocks wanted to fight too much and stared at competitors too fiercely.”
The king could not understand that, but to his credit, he bore with it patiently. One day, Gi-sung finally declared the cocks were ready. His cocks did not even glance up when the other cocks approached, nor did they respond when the other cocks cried out. Gi-sung explained that if the cocks looked in a cockpit like they were made of wood, they have the virtues of a champion. Other gamecocks will be scared off as soon as they fight, Gi-sung said.
Imagine a rooster in a bloody cockpit, withdrawn as if it were a log. Indeed, that refers to the supreme stage of combat, in which you defeat the opponent without a fight. However, the term wooden rooster has changed in meaning over time. In the original story, it meant achieving the top of something. It now describes the state of being indifferent to everything. The contemporary Chinese people apply the term in a different context, such as referring to a state of apathy.
President Roh made another vow. He showed his willingness to veto the government restructuring plan of President-elect Lee Myung-bak. What a nice exit gift for his successor! President Roh cannot complain when the media call him a curmudgeon.
Nevertheless the public seemed cool about it. They do not want to make it an issue again and simply dismissed it as normal. People do not have hopes any more, except for the end of Roh’s term, which is coming in a month. The people whose hearts have turned wooden like a wooden rooster are smitten with one thought.
The last five years have indeed been murky times.