Brass adds a touch of polish to local dining

Brass adds a touch of polish to local dining 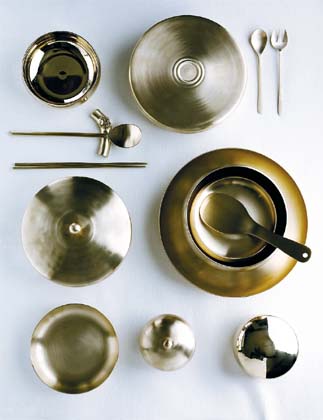 At first glance, it looks like a posh bar.
The walls are fashionably decorated with the calligraphy of a famous Chinese poet. Antique furniture adds to the atmospheric interior and there are straw floor mats specially ordered from Japan. On the customers’ tables, you see wine glasses rather than soju bottles.
But one other aspect makes Jeongpo a hot Zen-style Korean restaurant. Staff serve dishes in traditional brassware, complete with brass spoons and chopsticks.
“We wanted to keep the atmosphere as modern and natural as possible,” the restaurant’s manager says. “It’s essentially a Korean barbecue restaurant, but we wanted it to look like a pan-Asian fusion place. We thought stainless steel and ceramics wouldn’t give the antique and modern image that we wanted.”
Korean brassware, or yugi, is traditional dishware typically used for ancestral rites during festivals such as the Lunar New Year.
It’s making a comeback among stylish Korean restaurants that want to add authenticity to their menus.
Yugi dates back to the Goryeo Dynasty when it was used for royal events such as state banquets by yangban, Korean aristocrats.
But during World War II, the Japanese used the brass factories to make weapons.
These days most families and Korean restaurant owners prefer ceramic dishes and glassware, as it’s lighter and easier to clean.
Brassware needs to be polished and waxed once or twice a week to maintain its shine. Otherwise, the brass stains.
To avoid the hassle of polishing, Korean companies manufacture a matte brassware. You just need dishwashing detergent to keep it smudge-free.
But the look of antiquity doesn’t come cheap.
Hyundai Department Store’s Apgujeong branch put out a line of luxury brassware last week.
It was designed by a local yugi master as a Lunar New Year’s gift and it costs a cool 900,000 won ($951).
A full brassware set for ancestral rites is also very expensive. You can buy them through Internet shopping malls for around 1.5 million won per set.
Brass sets are typically given as bridal dowries. Sets include cutlery, rice and soup bowls and a variety of containers. The cost can easily soar above 1 million won.
“I’ve met a lot of restaurant owners who prefer brassware for their openings because the dishes raise the restaurant’s reputation,” says Kim Young-bin, a food stylist who specializes in Korean cuisine.
“Brass enhances visual presentation and maintains the temperature of the food. This is essential in Korean cuisine because there are a lot of stews and hot plates,” Kim says.
For those that won’t flinch at the price tag, brassware is in demand in upscale restaurants and for VIP banquets. Receptions for Queen Elizabeth II during her visit here in 1999 and President George W. Bush during the Korea-U.S. summit in 2002 used brassware.
Experts prefer brassware for two reasons. They say it looks elegant, and it keeps cold food cold and warm food warm. 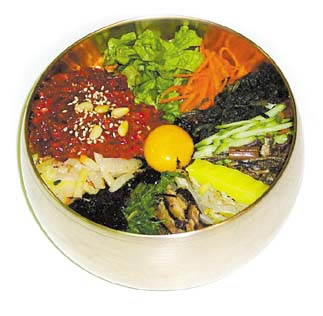 Okryugwan, a restaurant in Pyongyang, reportedly serves an average of 20,000 bowls of naengmyeon, cold noodle soup, a day in brass vessels.
The brass supposedly keeps the soup cold and retains the texture of the noodles.
North Korean expert Andrei Lankov calls the North Korean restaurant a “living museum of culinary arts.” It has stayed faithful to brassware since it opened in the 1960s.
Restaurants in South Korea are beginning to look at traditional vessels differently. Philkyungjae, a restaurant in southern Seoul, specializes in royal cuisine. It began serving its set menus and more expensive meals like shinseonro, a traditional hot pot and a signature dish in Korean royal cuisine, in brass in 2002.
Philkyungjae specially ordered its brass set from Ansung, a town in Gyeonggi noted for brassware.
“The food doesn’t taste any different, but the dishes look traditional,” says Kim Eun-hee, the restaurant’s manager.
“Brassware never breaks or changes shape, and the older the brass gets, the more luxurious it becomes. As it ages, the pigment takes on the look of copper, adding an extra sheen of tradition,” Kim adds.
A Korean restaurant in Seongnae-dong in southern Seoul called Gomone has been using brassware for organic and healthy meals made mostly from beans and tofu.
So far, their strategy has been successful. “If you put salty food in a brass bowl, the brass turns black,” says Lee Jong-hee, the owner of Gomone, which indicates whether your food is too high in sodium.
Lee says the brassware helps preserve the freshness and temperature of food, though there is no scientific evidence to support this.
Gomone gets its brassware from Lee Bong-joo, one of Korea’s intangible cultural assets, who donated his brass gongs and vessels last May to Bangjjayugi Museum in Daegu, North Gyeongsang.
His collection includes up to 1,489 traditional candlesticks and brass vessels from Buddhist temples.