[Talk of town]Beckham’s a star, but no interviews, please

[Talk of town]Beckham’s a star, but no interviews, please 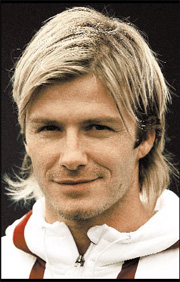 Becks is coming! Famous footballer David Beckham, currently with the Los Angeles Galaxy, will arrive in Korea next Tuesday for a six-day stay.
The English midfielder will be traveling with his team and his wife, former Spice Girl Victoria Beckham.
Despite his celebrity status, Becks has turned down invitations to appear on Korean entertainment TV programs, said a represetnative from Sema Sports Monday during a phone interview with Newsen, a local newspaper. The Korean sports marketing agency is in charge of the Galaxy’s schedule during the team’s visit here. No individual meetings with Beck are planned, the representative said.
So far, Beckham’s official schedule includes an autograph signing on Feb. 29, sponsored by Adidas. The signing will take place at 11 a.m. at Cheonggye Plaza, central Seoul. Becks and the Galaxy will play a friendly match on March 1.

Heartbreaker (Japanese Joe) ties knot
It’s time for Korean fans to sob - heartthrob Japanese actor Joe Odagiri is now a married man.
Odagiri, 32, and actress Kashii Yuu, 21, registered their marriage last Saturday, reported Nikkan Sports, an affiliate newspaper of Asahi Shimbun. The couple registered their wedding on the same day as their birthdays ― they were born on the same day.
Odagiri and Yuu officially announced their engagement on Dec. 27, 2007 at a news conference in Tokyo. The two were destined for each other, Odagiri said, in true dramatic fashion.
Aside from his wedding, Odagiri is quite a busy man. He will wrap director Kim Ki-duk’s “Sad Vacation” this month, then head to Brazil to film “Plastic City,” a movie jointly produced by companies in China, Brazil and Japan. 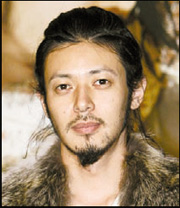 Korea rides wave of women directors
A tide of female directors is sweeping through Korea.
First came the success of Lim Soon-rye’s “Forever the Moment,” which has notched 3.8 million in ticket sales. Now Park Hyun-jin’s “Six Years of Love” is poised to be the next blockbuster.
Audiences are also excited about foreign female directors. Anne Fletcher’s “27 Dresses” is set to open March 6. For 27 Dresses, Fletcher, the director of “Step Up” (2006), teamed up with “The Devil Wears Prada” screenwriter Aline McKenna.

Jeonju film festival sees entry bump
The number of films entered in the ninth Jeonju International Film Festival is up 16 percent, the festival organizing committee reported.
Entries accepted between Oct. 2 and Feb. 5 numbered 1,204, up from 1,035 last year. The festival takes place in Jeonju, North Jeolla, from May 1 to 9.
By Lee Eun-joo