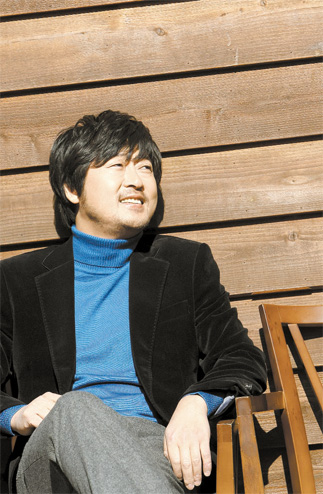 Na Hong-jin’s thriller “The Chaser” is now running at full throttle after a quiet start at the box office.
Since its release on Feb. 14, 1.7 million viewers as of last Sunday have bought tickets, edging the Hollywood sci-fi thriller “Jumper” from top spot.
The film was also sold to France, Belgium, Luxembourg, the Netherlands, Greece and Hong Kong at the Berlin Film Festival this year.
The film’s success owes much to Kim Yun-seok, the award-winning supporting actor from “The War of Flower” (2006), “Like a Virgin” (2006), and “The Happy Life” (2006).
Kim, 40, plays former detective Jung-ho, who gets fired for taking bribes. He’s now a pimp in charge of a bodobang, an illicit “happy ending” massage parlor.
When the prostitutes under Jung-ho’s management start to vanish, the former cop starts his own investigation.
He discovers that Young-min (Ha Jung-woo), posing as a customer, has seduced and killed them.
The JoongAng Ilbo interviewed Kim Yun-seok in Samcheong-dong, central Seoul earlier this month, before the movie attracted so much attention.
The actor said Jung-ho was his first lead role.
“I’ve been physically exhausted for the past five months but at the same time I am very happy with the way things are going,” Kim said.
The shoot was tiring because filming went two months over schedule ― bad weather caused huge delays ― and the scenes were physically demanding.
“Most scenes were shot in the dark and in heavy rain,” Kim said.
The role also required Kim to be in peak physical condition. As suggested in the film’s title, there’s a lot of running around in the film.
The script demanded that Jung-ho chase Young-min half-way around Seoul after Young-min demands a ransom for one of the abducted hookers (Seo Young-hee).
The chase sequences mainly take place in Mangwon-dong, but Kim’s role demanded that he spend a good portion of the film sprinting through Oksu-dong, Pyeongchang-dong and Bugahyeon-dong.
Then there were the fight scenes. “The bloody punch-up between Jung-ho and Young-min at the end of the movie took 40 hours to shoot,” Kim said.
Jung-ho is possibly the most complex role Kim has taken on. “He [Jung-ho] knows how to play around with law, order, ethics and morals,” Kim said.
The interesting aspect of the lead character lies in his ambiguous morality. Is he a good or a bad guy? Or is he everyman?
“Jung-ho is a selfish character,” Kim said, noting how the character leans more toward the dark side.
“But every man contains evil deep in his heart,” Kim said. “In that respect, Jung-ho is as ordinary as other men.”
Kim praised Na’s commitment to getting the film made, explaining that Na devoted his early 30s to the feature, from initial concept to final production. “I truly felt Na wrote from the heart,” Kim said.
The Chaser follows in the footsteps of Bong Joon-ho’s mystery thriller, “Memories of Murder” (2003). Both are well-made murder-mysteries, but the connection runs deeper.
Song Kang-ho, 41, who plays Detective Park, the main character in Memories of Murder, is one of Kim’s best friends. The two met when Kim came to Seoul from Busan to start an acting career.
They both worked at Theater Yeonwoo, an underground experimental theater company set up in 1977 that staged some political dramas in defiance of the military government at the time.
The two spent time together in Daehangno in central Seoul, sticking up posters advertising their plays and living on instant noodles.
These were tough times and Kim quit acting and went home. Song eventually persuaded him to come back, and cinemagoers are grateful.
At the end of the interview, Kim quoted the American actor and director Sean Penn, who once said there are no rules in acting.
“You just have to accept the world as it is, the smooth and the rough,” Kim said.
“As an actor you have to maintain complete control. Everything falls to pieces if an actor’s mind is distracted.”