From silver bowls to rifles, gifts to give a head of state

From silver bowls to rifles, gifts to give a head of state 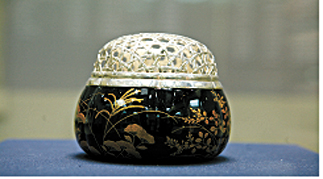 An incense jar from Japan’s King Akihito to former President Kim Dae-jung.Provided by the National Archives

During the 60-year history of the Republic of Korea, its presidents have received more than 5,000 presents on special occasions such as inaugurations, summit talks and other international events.
When former President Roh Moo-hyun took office in 2003, the first gift came from U.S. President George W. Bush. It was a silver bowl. Bush also gave Roh a draft of one of Abraham Lincoln’s speeches.
Other presents include a lacquered handcrafted bowl from former Japanese Prime Minister Junichiro Koizumi, a hunting gun from Russian President Vladimir Putin and a portrait of Roh from the former Prime Minister of Thailand, Thaksin Shinawatra.
By law, Korean presidents are not allowed to keep the presents for themselves. However, they can set aside gifts under a certain price or those received as personal items.
This procedure is the same in most countries. In the United States, recipients can keep gifts priced under $300.
Presents to other former Korean leaders include an incense jar from Japan’s Emperor Akihito to former President Kim Dae-jung and a model of a boat made of gold from the late Indonesian President Suharto to former President Chun Doo Hwan.
The Ministry of Culture, Sport, and Tourism was originally in charge of the management of presidential gifts.
However in February this year, the Ministry of Public Administration and Security took over their administration of state gifts.
Currently around 300 state gifts are on loan to different places in the country for public display.
People can view about 100 of them at Cheongwadae’s Hyojadong Sarangbang, a memorial and exhibition hall in the Blue House, the Korean president’s office and residence.
The National Archive is in the process of sorting the data transferred earlier this year. Once the process is finished, it plans to hold various public displays of presents that have notable diplomatic importance and artistic value.