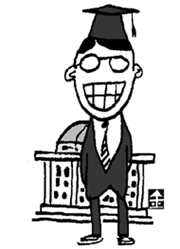 The French sociologist Pierre Bourdieu warned that the image of independent intellectuals was in jeopardy in the era of mass media. He introduced the term “telefessor,” a portmanteau of television and professor, in his 1998 book “On Television.” A telefessor, also known as an “instant intellectual,” is one who produces large quantities of easy-to-swallow knowledge, fast food-style.
He called those who chase political power “political telefessors.” The equivalent term in Korea would be “polifessor” — a professor who is actively engaged in politics. Polifessors attracted a lot of attention during the 18th general election. A total of 25 ran, 16 of whom were defeated. Over 100 applied for party nominations. It is well known that as many as 1,000 polifessors poked around political circles in the past presidential election.
They were criticized by some because they maintained their social status as people of learning during the runup to the election, or even after being elected, which possibly infringed on the academic curriculum. Seoul National University is now drawing up internal regulations regarding the candidacy of polifessors.
“Polinalists,” political journalists, also emerged as a buzzword. About 40 former and current journalists applied for party nominations with the Grand National Party.
The English dictionary does not include Konglish words such as polifessor or polinalist. The terms are used to explain Korea’s unique political environment.
We do not have to take issue with the fact that professors and journalists are actively engaging in politics. But we do need to worry about whether they are disregarding their responsibilities to do so.
Forty-six percent of eligible voters went to the polls for the general elections, one of the lowest turnouts ever. As turnout has continued to decrease, there are valid concerns that some voters are no longer interested in politics. Yet the number of politicians emerging from academic and journalistic circles has been increasing.
Politics and politicians are growing less popular, but the popularity of professional politicians in academic circles has been rising at an unprecedented pace. The position of professor or journalist is regarded as a stepping stone to public office.
Jeong Yong-jun, a leading journalism scholar, criticized that some academies engage in business by thoughtlessly accepting programs from supporters’ organizations. He maintained that while scholars conduct in-depth studies just to cope with special interest demands, there is no scholastic accumulation. Korea’s academic circles are definitely in jeopardy.