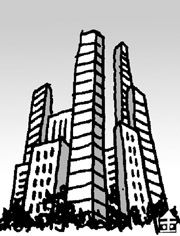 In contemporary parlance, he is a developer. He resurrects old buildings in downtown areas. His technique was simple. He made courtesy calls on land owners everyday from dawn. And he listened attentively to their words.
He bowed hundreds of times as a sign of respect to an obstinate landed proprietor, with a view to persuade him to reconsider his resistance. This is the story of Taikichiro Mori, the legendary Japanese real estate tycoon. He was one of the world’s richest people, according to Forbes magazine in 1991 and 1993.
There are many high-rise buildings bearing the Mori name in Tokyo, enduring testaments to the many redevelopment projects that have passed through his hands. He had huge tugs-of-war with land owners, but he was never known to rush them.
Eventually his projects would forge ahead, after explaining redevelopment blueprints to everyone’s satisfaction. He has never forgotten to return prearranged revenues to land owners, after a project was completed. As word spread that Mori was trustworthy, many jobs poured in. His wealth once exceeded more than 15 billion dollars.
It is rare for a rich person who has amassed a fortune through speculative real-estate investment not to be detested. Mori was different. Many Japanese recall Mori as someone who valued his conscience above everything else. This reputation was cemented by his actions during Japan’s bubble economy. He never conceded his opinion through the 1990s property bubble in Japan. He counseled: “Do not buy any land. Tokyo’s land prices should be reduced by half.” He did not care about his shrinking wealth. He himself no longer bought land.
A decade later his prescience was proved correct. Land prices in Tokyo fell dramatically from 10 million yen to 4.5 million yen (about $100,000) per square meter.
Roppongi Hills was the only exception for Mori. He continued to invest in old buildings with a vision to transform people’s lives in Tokyo. It took 17 years to complete the redevelopment project. Tokyo, an ailing city, was about to get a new cultural and entertainment heart: Roppongi Hills, the legendary redevelopment created by an individual’s firm determination. In recent years since, Mori’s company has been busy building a 101-floor skyscraper, Vertical City, in Shanghai.
Recently the number of Korean tourists visiting Roppongi Hills has increased to unprecedented levels despite foreign exchange woes. I hope that Koreans will bring home new insights from Mori, not just fascination from the brightly lit streets. In fact, Korea is second to none in the field of real estate. I also hope that a Korean Mori will be born in the near future.