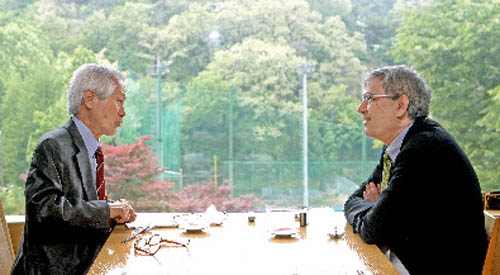 Orhan Pamuk, the Turkish author of award-winning novels “My Name is Red” and “Black Book” recently visited Korea for a series of lectures and book readings.

The winner of the 2006 Nobel Prize in Literature, Pamuk has sold 250,000 Korean-language copies of his books here. He is the best-selling author among the winners of the Nobel Prize in Korea.

The writer sat down with journalist Kim Young-hee of the JoongAng Ilbo over a recent lunch.

Kim: Turkey comes across to me as a place rich with literary imagination because it’s the crossroads of different civilizations, cultures and it has a history of over 1,000 years.

Pamuk: Turkey is a great subject for any writer. I feel so lucky. I have so much to write about, including economical, political and religious problems, blood conflicts, poverty, wealth and diverse cultures. Also, we’re very close to Europe. The previous generation of Turkish writers neglected Istanbul. They wanted to write about Turkey in the style of Gorky and Steinbeck. So in that sense, I’m the first recognized novelist exclusively writing about Istanbul.

Kim: In that sense, can we call Turkey the center of human civilization?

Pamuk: Sure. The past is one thing, but being the real center is another.

Kim: How do you define the relationship between economic and literary affluence? If either were a nation, which would have the better literary figures?

Pamuk: There is a strong relationship, but it’s not necessarily the only one. In fact among English and American writers, there is economic strength, but at the heart of it lies the English language. America’s cultural strength is based on Hollywood, rather than literature. But since the economy is so successful, the whole world imitates America. And since English is the central currency, everyone reads their works, and since their films dominate the world, it’s hard to resist them. Japan has achieved better economic success than France, for example, but Japan’s visibility in world literature, compared to France, is very small.

Kim: Your novel “My Name Is Red,” is packed with details about Turkish culture. How much research did you do?

Pamuk: The book is divided into three sections. One side deals with 15th and 16th century Ottoman and Persian paintings. This research was fun because I wanted to be a painter between the ages of seven and 20, as I say in my new book. There’s also the sentimental side to the book. Thirdly, the family relationship in the book is autobiographical. I sometimes joke that I projected my life in the 1950s in Istanbul to the 1590s in Istanbul.

Kim: Korean newspapers reported this morning that Doris Lessing had said the Nobel Prize was a disaster because she has to give so many interviews and lectures. How do you manage your time?

Pamuk: I joke to people about how the Nobel Prize expanded my bank account and my e-mail account. But then, since other writers complained, I set my agenda straight. I just finished a 600-page book. I work even harder than before I won the prize. I received the Nobel Prize at a relatively young age.

Kim: Do you think it is the role of writers to point out government wrongdoings?

Pamuk: Not necessarily. I am not a political writer. I do not make it my business to attack the government. Most of the time, I just think about literature.

Kim: Is a good writer born or made?

Pamuk: There are born writers who are not made. They are talented, but they don’t work or read much, or the other way around. There are some writers who read so enthusiastically but they’re, unfortunately, not very talented. That’s very sad.

Kim: This may be a rude question, but why have there been greater writers in the West than in the East?

Pamuk: It’s not that there are greater writers in the West. They are just better known. The Spanish director Louis Bunuel once said whatever celebrities in the West say, John Steinbeck is famous because America is powerful. There are so many important American and European writers because English is their currency. And there are many great writers throughout the world.

Kim: Can you name writers whom you respect, whom you like, whom you benchmark?

Kim: Is this your second visit to Seoul? Has it changed from your last visit?

Pamuk: Well, it’s bigger and richer. And buildings are getting taller and taller.