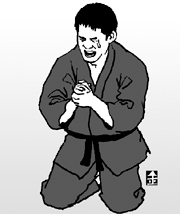 Psychologist and Nobel Prize winner Daniel Kahneman of Princeton University used to ask his interview subjects, “You are smiling on the outside, but personally, aren’t you miserable?”

Eventually he was forced to abandon this question because many people would suddenly burst into tears. Despite trying other methods, Kahneman ultimately failed at designing a standard to measure subjective well-being.

However, the lingering question of his experiment remained for a long time: How many people have lived their lives swallowing back their tears?

Of all the primates, humans are the only species that can cry. From our first breath, we begin life by crying. Although tears don’t flow because the tear glands are not functioning yet, tears begin to trickle four days after birth. After six months, they flow properly. After that, they flow profusely. A one-year-old baby cries 65 times a month on average.

Once we become adults, we don’t cry as much. We tend to think first think about our social status and saving face. However, when we experience extreme emotion, tears flow naturally as a physical response. This is beneficial for our health as tears carry the stress hormone called catecholamine. If this hormone accumulates in the body, we can have problems with digestion, the heart, hardening of the arteries and high cholesterol.

This is what happened when Princess Diana passed away in 1997. British citizens struggled to maintain a stiff upper lip and held back their tears. It was said that for a while afterwards, the number of people seeking psychological help was halved. After crying to one’s content, the nerves become stable and the heart is cleansed by a cathartic effect. Psychologists referred to this as the “Diana Effect.”

On the first day of the Beijing Olympic Games last Saturday, as judoka Choi Min-ho won a gold medal in the 60-kilogram class, he could not stop his tears, even after stepping off the winner’s podium. All the stress he experienced to get to this point and the joy of winning must have been mixed up in an emotional cocktail.

Another judoka, Wang Ki-chun, who lost the final of the 73-kilogram class, on Monday cried as he left the mat. It must have been out of regret for not having met the people’s expectations.

Whether they win or lose, the athletes who do their best move us, their tears more so. Until these Games, how many tears they must have swallowed as they walked a lonely path. No longer do they have to endure the pain, so let the tears flow and our hearts be cleansed.