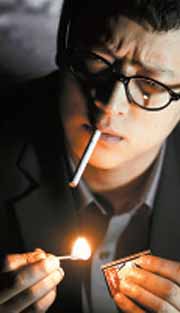 The crowds were out in force at the four-day promotional screening of “M” (2007), starring Kang Dong-won (right), late last month in Japan.

M, directed by Lee Myung-se, had been invited to the Hallyu Cinema Festival. Some 4,000 Japanese fans of the Korean actor attended the screening.

In the psychodrama, Kang stars as Min-woo, a writer who suffers from strange nightmares. Entertainment company Avex will release a Japanese version of M on Dec. 19.

The 17 Korean films screened during the Hallyu festival, including “Lovers of Six Years,” “The Show Must Go On” and “A Love,” are on a three-month relay screening in 40 movie theaters in Japan. By Lee Eun-joo