Grumbling about life in 4-part harmony

Grumbling about life in 4-part harmony 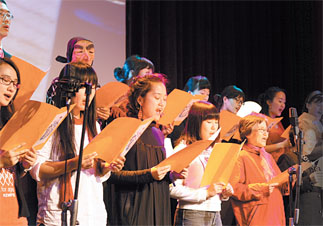 The performance of Korean Complaints Choir held in central Seoul on Saturday. Provided by the organizer

A middle-aged Korean woman steps forward in front of the stage from the chorus, clad in a silver bonnet and a red flower in her hair.

“They ask me,” she sings in Korean in a high-pitched voice, “‘How old are you?’ and ‘Where do you live?’ All the citizens act like the employees of the statistics office. What’s wrong with getting old?”

The crowd breaks into loud cheers at a hall in central Seoul. Another woman sings, “We aren’t squirrels. Why do we have to pass through subways and footbridges when cars take over the roads?”

These were some of the complaints belted out last Saturday by a Complaints Choir, a new way of giving voice to your problems. 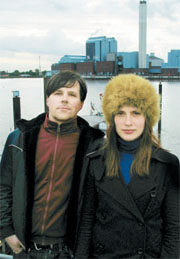 Oliver Kochta-Kalleinen, left, and his wife Tellervo Kalleinen, the founders of Complaints Choir.

Every day we hear the same old complaints, about too much spam in our in mailboxes, our noisy neighbors, the heavy traffic, low salaries for women and the rude wait staff in restaurants.

But it’s not often you hear people grousing in four-part harmony, unless you have heard one of the many Complaints Choirs that have sprung up around the globe.

“People complain a lot, but each one has some truth to it, no matter how small,” says Oliver Kochta-Kalleinen, a German artist who founded this global community project with his Finnish wife Tellervo Kalleinen three years ago.

Singing is cathartic, the artist explains. “When you suppress your feelings, they only grow into neuroses.”

The Helsinki-based artists found themselves moaning one day about the Finnish weather and they decided to turn their complaints into a musical chorus. The venture was called Valituskuoro, which means Complaints Choir in Finnish, a term used to refer to situations when people complain about the same problem at the same time.

According to the group’s Web site, the couple offered their idea to different events where they were invited as artists. Eventually an art institute in Birmingham, England’s “second city,” took up the cause.

In 2005, the couple sent out an open invitation to the people of Birmingham to sing about their complaints. Eighteen people replied and after a brief period of rehearsal, they performed a song that a local musician had written based on the complaints sent in.

The Birmingham performance gathered over 20,000 hits in one week on YouTube and the idea spread. Similar choirs were set up in more than 20 cities, including Chicago, Singapore, Florence, St. Petersburg and Seoul, where there was a performance near Jogye Temple, central Seoul, last Saturday. 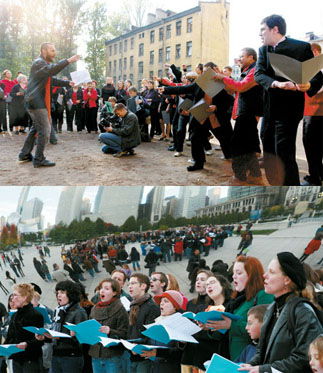 The songs touch on the conflicts faced by people all around the world, from profound social issues found in each community to passing thoughts drifting into our minds every day, such as:

“Why are we always disappointed with things?” (St. Petersburg)

“Where do they spend my taxes?” (Korea)

“We always lose to Sweden in the Eurovision Contest.” (Helsinki)

“Why can’t we be buried when we die?” (Singapore - the country limits the burial period of the dead to 15 years as part of the state’s environmental policy.)

“Everybody cares but only enough to buy stickers.” (Chicago)

“Why don’t the Rolling Stones ever come to play here?” (St. Petersburg)

Over 100 singers aged 4 to 65 heeded the call and over 200 complaints were collected. Suicide, unemployment and fears over food safety were some of the issues.

In the first brainstorming session, Leonidas Lee, a 24-year-old office worker from Seoul, complained about the Korean Football Association.

“I don’t think the current coach of the national football team is doing his job properly,” he said. “We need another coach.” But his complaint got dropped after the vote.

“I come from the generation of the Korean War,” she says. “Even to this day, I feel like I need to dig a hole in my backyard for my family to hide just in case our enemy drops a bomb on our house if war breaks out.”

Hwang’s submission - “Stop war now” - was included in the Korean version of the complaints choir.

“I don’t want to hear the word ‘war’ on the news anymore, here or anywhere else,” she says.

Reading through the complaints list collected in Korea, Chun Seong-bo, the director of the Busan Biennale, grew perplexed at the heavy political undertones, more so than in other countries.

“I noticed how sloganized each complaint sounded in Korea,” he says. “I think it boils down to how unsettled our society still is at the moment. We never get around to making a decent observation about our everyday lives. We’re so preoccupied with problems that go on in our society that we lose touch with ourselves.”

Still, complaints go beyond the personal boundary in other regions. The idea became self-evident when Media Development Authority of Singapore, the state’s media watchdog, banned a performance by the Singaporean Complaints Choir one day before the scheduled show earlier this year.

The problem was that six choir members were not Singaporean and the government argued that only Singaporeans can complain about the Lion City. The choir could sing only if the non-Singaporeans stepped down, including the conductor Wai Lun, a Malysian.

As a gesture of political defiance, the Singapore Complaints Choir canceled its show.

Kochta-Kalleinen, who watched the Saturday performance in Seoul, is curious about why people complain. Born in Hamburg, and moving around between East and West Germany until he settled in Helsinki, he has found little difference in the ways people carp on about their lives.

His own complaint - a traffic helicopter patrolling outside his top-floor flat in Helsinki every morning waking him from sleep - is no different.

In his latest project, Kochta-Kalleinen asked people to send in stories about frustrating situations in their lives and what they wish to do if they had a choice. He’s hired professional actors to re-enact their fantasies.

“It opens your eyes to people’s lives,” Kochta-Kalleinen says. “When you come to a new city and hear people’s complaints, you feel like you’ve lived there for 20 years.”