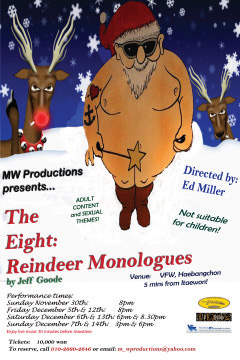 “The Eight: Reindeer Monologues” will premier in Korea on Sunday. Provided by the organizer

For foreigners living in Korea who have yet to pick up the Korean language, even something as simple as enjoying a play may pose a challenge. There are only a handful of performances that offer English subtitles. Needless to say, those performed completely in English are even fewer.

But here’s an option for some theater-starved expats, or even Koreans looking for a fun English learning experience: “The Eight: Reindeer Monologues,” a black Christmas comedy. Organizers promise an hour and a half of hilarious plot and good laughs.

Beware, though. It’s not the typical holiday comedy you would expect at this time of the year. It not only shakes up the image of Santa Claus that’s been embedded in us since childhood, but it also contains some adult content.

The Eight revolves around a shocking scandal that erupts at the North Pole. One of Santa’s eight reindeer accuses him of sexual harassment. Soon other sleigh pullers follow suit and dish about Santa and his “hidden character.” The North Pole finds itself in deep confusion, amid horrific tales of corruption and perversity.

Who is the real Santa? Is he the naughty one, after all? Or is he just being framed by his animal helpers? With twists and turns, the case becomes more and more of a mystery.

“We wanted to bring a Christmas-themed play, but not something typical, rather something more subversive and unusual,” said Margaret Whittum of MW Productions. Whittum recently founded the production company for English theater in Korea and The Eight will be the debut.

“Ed Miller [co-founder of MW] saw the play in Philadelphia and thought it would be a good match. It’s not that difficult performing in a bar [with the small cast size and few props needed].”

The Eight, written by American playwright Jeff Goode in 1994, toured across the United States, receiving favorable reviews. Since 1998, the play has gone on to be performed in Canada, Australia, Germany, the United Kingdom, Italy and elsewhere. This year marks the first year the play will be performed in Asia. Beside the planned performance in Seoul, it is also set to be staged in Chiang Mai, Thailand.