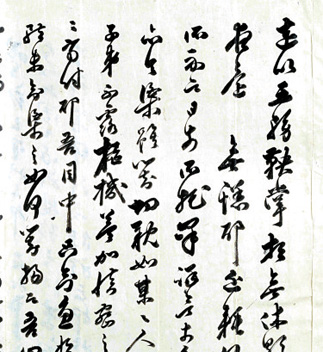 Handwritten letters from King Jeongjo of the Joseon Dynasty to Sim Hwan-ji, one of his senior officials, were made public yesterday. Historians say they provide a better understanding of how the king ruled in his later days.

In a joint press conference by the Academy of East Asian Studies at Sungkyunkwan University and the Institute for the Translation of Korean Classics, scholars said the 295 personal letters from the 22nd king of the Joseon Dynasty provided a glimpse into his real character and how policies were devised at the time.

Experts say the letters also undermine existing rumors and theories about the king.

For instance, Sim Hwan-ji (1730-1802) was widely regarded as the leader of those who opposed the king. But the letters show that on some policy issues, the King and Sim collaborated, and King Jeongjo (1752-1800) was not shy about seeking Sim’s advice. The king also told Sim about his own health.

The letters were scrutinized by experts before being ruled authentic. They were in private possession when the school heard about them.

Scholars are amazed that the writings, which often take a conversational tone, survived despite the king telling Sim several times to keep them secure and burn them.

“Like King Jeongjo, a seasoned politician, Sim himself also was aware of the political benefits, and that is why he kept the letters,” said An Dae-hui, a professor of Chinese Studies at Sungkyunkwan University.

The correspondence took place between August 1796 and June 1800. At times the king wrote four times a day, as a record book kept by Sim shows. King Jeongjo’s reign has been regarded as exemplary. He is widely viewed as a scholar and gentleman, but the letters show a ruler who at times appears agitated and who used rough language to describe some of his subordinates.