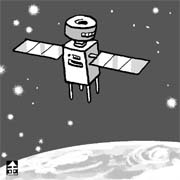 Let’s say you’re on a reality TV program and you’ve got a mission: “Drink a 350-milliliter can of soda, make a satellite out of the empty can by installing electronic circuits and communications equipment in it, and launch it into outer space. Receive photos taken by the camera attached to the satellite and data that the satellite gathers in space. Your budget is $1,000, max.”

Your jaw would probably drop. You might insist that you would prefer another task, for instance, stuffing an elephant into a refrigerator.

In fact, contrary to what you’d think, the task is not entirely impossible.

The CanSat Competition has been held every year since 1999, producing many successful results. College students build satellites on their own and participate in the event every November. They gather in the Nevada desert and launch their satellites up to 30 kilometers (18.6 miles) above the ground. They cannot shoot them into the Earth’s orbit, or higher than 200 kilometers, as their budget couldn’t afford a costly rocket launcher.

But some CubeSats did make their way into space. A CubeSat is a 10-centimeter cube-shaped satellite, a more sophisticated version than those built by participants in the CanSat competition.

Some of them are carried as payload when a little space is left in a rocket used to launch a large satellite and fulfill their mission as satellites.

These days, one can even buy a CanSat or a CubeSat kit.

In 2007, Colombia joined the club of countries that possess satellites, after it launched this kind of satellite in Baikonur, Kazakhstan.

Now, around 6,000 satellites are orbiting around the Earth.

Some are intelligence satellites with high-tech cameras that can even capture images of people sunbathing in the nude. Some are weather satellites and others guide car navigation systems.

One satellite was launched not by a rocket but by a golf club.

In 2006, a Russian cosmonaut who was staying in the International Space Station hit a golf ball into the Earth’s orbit. The ball is no less than a satellite, according to the definition of a satellite as “an artificial object that orbits around the Earth.”

But top honors for a satellite with the most peculiar task goes to the Kwangmyongsong?1. North Korea claims that in 1998 the Kwangmyongsong?1 was launched into orbit where it accomplished its mission of transmitting a song in praise of General Kim Il Sung in space.

But the song has never been received anywhere. The satellite must have crashed somewhere into the Pacific Ocean.

North Korea announced that it would launch the Kwangmyongsong?2 soon.

We are, however, slightly suspicious that they will use a ghost satellite this time, too - a satellite that exists only in the fantasies of the North Korean authorities.