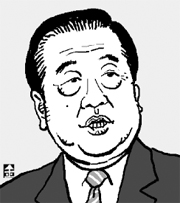 In October 1991, Japan’s Liberal Democratic Party was set to choose a new leader after Prime Minister Toshiki Kaifu stepped down. Three politicians including Kiichi Miyazawa ran for the election. During the campaign they were called in to the office of Ichiro Ozawa, the acting chairman of the biggest faction, Takeshida, to be interviewed.

Miyazawa, the 72-year-old veteran politician, had to impress the 49-year-old Ozawa in order to become prime minister. Ozawa didn’t run for the election himself only because he was too young. At that time a prime minister in his 50s would have been regarded as too young.

It was Ozawa again who made Miyazawa step down 20 months later. They confronted each other over the issue of introducing a single-member constituency in Japan’s electoral system and Ozawa rallied men who supported him, collaborated with the opposition party and passed a vote of no-confidence against the prime minister. The incident led to the LDP becoming the minority party for the first time in 38 years in subsequent elections.

Ozawa broke away from the LDP, mustered eight small opposition parties and created a coalition. The face of it was Prime Minister Morihiro Hosokawa but the central leader was, of course, Ozawa.

As seen in these incidents, Ozawa could make and break political leaders. He could have become the prime minister himself had he wanted to, but instead, he remained the king maker. As he was young and powerful, he perhaps thought there would be plenty more chances to come.

But it was only recently that he rose to the top after wandering in opposition circles for around 20 years. In the general elections scheduled for September, it had been forecast that the chance of an Ozawa-led Democratic Party of Japan winning was 99 percent.

On the back of the LDP’s considerable failings, Ozawa seemed destined to achieve his dream of shifting the balance of power for the first time in Japan in the truest sense.

However, Ozawa’s destiny of becoming prime minister is now in doubt. The Tokyo District Public Prosecutors’ Office is giving him a hard time since his secretary allegedly took illegal donations. Ozawa is claiming innocence but the general public is already urging him to step down. If the case proves to be true, it would end Ozawa’s political life, whether he was aware of the crime or not.

Meanwhile, many Korean politicians are trembling in fear as well these days over brewing storms from prosecutors. Korea’s corruption case also involves illegal donations provided by a businessman, just like Japan’s.

The two countries are the biggest rivals when they dispute history or when they face off on the sports field. It is therefore hard to understand why politicians’ behavior in the two countries resemble each other so closely.