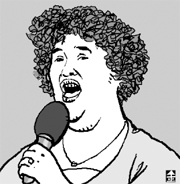 He was an insignificant-looking man who appeared to have very little confidence and looked like he might make a fool of himself in front of the millions of viewers around the country watching.

However, when he opened his mouth and sang “Nessun Dorma” from “Turandot,” the studio audience leapt to their feet and roared their approval.

Although he didn’t have much money, Potts paid for signing lessons so that he could realize his ambition. His appearance on the show turned him into an icon for achieving one’s dreams against all odds.

Susan Boyle, a contestant on the show last week, was obviously a second Paul Potts. The 47-year-old Scot wore frumpy clothes, lived by herself with a cat called Pebbles and admitted she had never been kissed.

The audience and judges seemed skeptical at first but Boyle won everyone over with her rendition of “I Dreamed a Dream” from the musical “Les Miserables.”

Around 10 million viewers are estimated to have seen the broadcast that day, and within one week, more than 20 million around the world had watched Boyle on YouTube, the video-sharing Web site.

The birth of another star is predicted, regardless of whether or not she wins this season’s contest.

Unexpected sensations have been born overnight in Korea, too. In 1984, a university student called Lee Sun-hee became a star when she sang “To J” at the Riverside Song Festival. The moment the student Lee Sang-eun appeared on the same stage four years later is also still talked about.

However, such stars soon disappear. More and more TV programs feature regular people with talent, but why are no more unexpected stars being born?

However, we shouldn’t ignore the producers of the show who put Potts in the limelight and perfectly packaged his story. After all, no stone shines on its own unless someone polishes it.

It’s arguable that the real stars of the show are the production people who unearth candidates with less than average looks, seemingly unfulfilled lives but great voices, and then package them into hit products.

And we can’t expect to see the arrival of a new voice unless the public is prepared to crack open wallets and purses and pay for the merchandise.

In the U.K., Potts sold 680,000 copies of his debut album “One Chance.” Would a Korean Potts have been as successful?