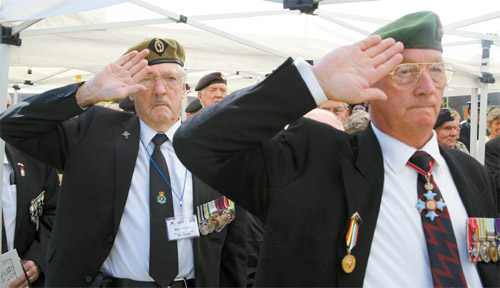 Veterans remember those who died in the Korean War (1950-1953) at a memorial service in Gapyeong County, Gyeonggi, on April 17 when a new memorial was unveiled at the Commonwealth Park in Gapyeong.[JoongAng Ilbo]

Gazing over No Man’s Land from his hilltop position, 2nd Lieutenant Brian Parritt, a Royal Artillery observation officer with the Commonwealth Division, spotted movement. Down in the valley, two Chinese soldiers were laying wire: a perfect target. Over the radio he requested a troop barrage: four guns. Word came back that he would get a battery: eight guns. Those orders were countermanded: It would be a regimental shoot, 24 guns. No, a divisional shoot 48 guns. Finally, orders confirmed a corps shoot: 250 guns. Parritt was mystified - and astounded. An express train shriek overhead heralded a hurricane of explosive.

“The whole front just disappeared in smoke,” Parritt, now a retired brigadier visiting Korea for the first time since the war, recalled Friday. “I was later told this was the last day of the war, we were going to sign [the armistice] at midnight, and this was to be a demonstration of resolve.”

Midnight. Would the truce hold? From enemy lines, came a plopping sound: mortars. Night turned into day. Flares! The Chinese were launching a celebratory display. The British responded. “All our chaps furiously disobeyed orders and sent up smoke and flares,” Parritt said. “A great shout went up, then all went quiet.” Next, from the trenches curving around the pulverized British-held hills, a song echoed through the darkness. “There’ll always be an England.”

July 28, 1953. Across the cratered peninsula, the guns lay silent. Parritt and a comrade ventured cautiously down into the valley. Suddenly, two Chinese popped out of cover. “They looked to see if we had weapons; we did the same,” said Parritt. “Then it was all smiles and shaking hands, and we took a photo.” With a start, Parritt realized that the two Chinese were the targets of his massive barrage the previous day. Neither had a scratch. “I’ve been thinking how strange war is ever since,” Parritt mused.

Their aim: annihilate United Nations units and seize Seoul by May Day.

A key axis was the Kapyong valley in Gapyeong County, Gyeonggi. (Military historians use the old spelling “Kapyong” to refer to the battle, but the modern-day spelling for the area is “Gapyeong.”) The 27th Commonwealth Brigade, consisting of battalions of Britain’s Middlesex Regiment, the Royal Australian Regiment and Princess Patricia’s Canadian Light Infantry, supported by New Zealand’s 16th Field Artillery, were rushed up to hold the line.

“The fear is there before it begins,” said Middlesex veteran James Beverley, visiting the battlefield this week with a group of Commonwealth veterans on their annual visit to Korea. “It goes when the action starts.”

The Middlesex deployed into a backstop position down-valley; the RAR and Princess Pats took the high ground covering the Kapyong pass.

The “human wave” engulfed the Australians and Canadians, supported by American Sherman tanks. The Chinese came at night. Bugles sounded in the darkness, maneuvering units. Then, the assault. Grenadiers hurled volleys while shadowy crowds of submachine gunners charged forward in the flashes.

“You could sometimes see movement, you could hear ’em and you could smell ’em - smell their garlic,” said Joe Bolongo, a Princess Pats veteran. “I could hear explosions going off, and I asked myself, ‘What the hell am I doing here?’”

Overrun, the Canadians called artillery onto their own position. In their slit trenches, the Princess Pats had some cover: The Chinese, swarming in the open, were obliterated. The Australians cleared their positions with a bayonet charge. American tanks fought through to secure the rear of the cut-off Canadians.

Although Kapyong has been overshadowed by the tragedy that took place in the west - Britain’s Gloster battalion was wiped out on the Imjin River on April 25 - it remains one of the war’s most notable actions. 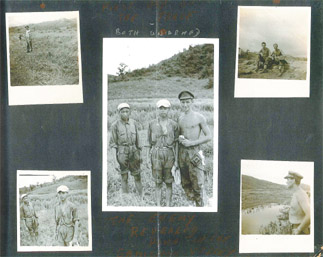 Royal Artillery 2nd Lieutenant Brian Parritt in No Man’s Land with two Chinese soldiers he had tried to kill the previous day. Provided by Brian Parritt

This year was particularly special for some veterans. After services at the Canadian and Australian memorials in the valley, a new obelisk was unveiled at the Commonwealth Park in Gapyeong to the Middlesex.

“When I heard this was being done, I said, ‘I’m going back,’” said Albert Rogers, one of six Middlesex veterans who returned. “Four of us joined the army the same day and three have come back,” he added. “The fourth is buried in [the UN Cemetery] in Busan.”

The 27th Brigade was a precursor of things to come. The Commonwealth Division, consisting of Australian, British, Canadian, Indian and New Zealand units, was formed the same year, and held key positions overlooking the Samichon Valley. After visiting Gapyeong last Friday, on Saturday, veterans held a service on the Imjin - Britain’s bloodiest post-World War II battle - then were welcomed by the ROK 25th Division, whose sector of the DMZ overlooks the rolling hills of the Commonwealth’s old battleground.

James Barrie of the Black Watch was amazed to find his old trench position, now a 25th Division observation post. “I never thought I’d see this,” he said with emotion. “If you went past here, there were enemy patrols waiting for you…”

The Royal Leicester Regiment’s James Brough recalled a mate who was hit by shrapnel that shredded the lower half of his torso. “I said, ‘You’ll be all right,’ and put him on a stretcher, then I heard him call for his Mom: he was gone,” he recalled. “I was 19 then, I’m 76 now, and it still hurts.”

Yet although UN forces did not win the war, South Korea has clearly won the peace. “Sometimes, politicians get it right,” said British Ambassador Martin Uden of the decision to defend South Korea . 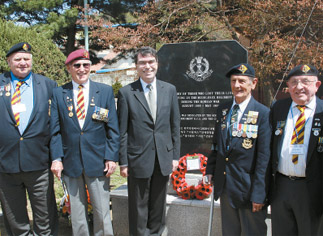 Veterans of the Middlesex “Diehard” Regiment with British Ambassador to Korea Martin Uden at the new memorial to their regiment in Gapyeong, Gyeonggi. [JoongAng Ilbo]

Veterans were astounded at Korea’s prosperity. Many commented on the reforestation: The once-barren hills are now carpeted with trees.

Others - handing out scholarships donated by Commonwealth companies based in Korea to local schoolchildren at memorial services - remarked on the smart, cheerful children, so different to the silent, traumatized orphans of the war.

“Now, I see what has taken place, and see how the people are so friendly,” said Bolongo, the Canadian. “What more can you ask?”