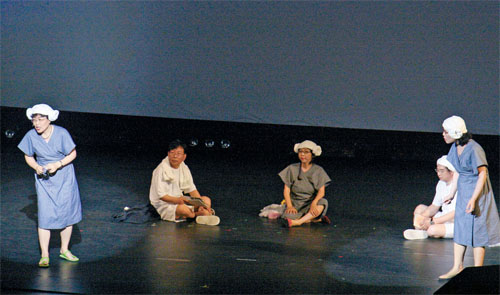 IF Festival participants present a mock trial during rehearsals for this year’s show concerning the adultery laws in Korea, which, the festival organizers say, historically favor men. Provided by the organizer

It used to be a favorite show on TV, especially for men. The women would parade up and down a stage in their bathing suits and the judges would assess their poise and overall numeric worth.

But eventually the critics of Miss Korea grew louder, accusing such pageants of commercializing women and their bodies. In 2002, the show was taken off air after 45 years on prime-time TV and hasn’t been seen on the airwaves since.

One of the fiercest critics was the Anti-Miss Korea Festival, which started in 1999. It played a decisive role in ridding TV schedules of the Miss Korea show by parodying and criticizing beauty shows, pushing forward a more radical agenda that unveiled the ugly side to Korean society, one that treated women as second-class citizens.

This year, the Anti-Miss Korea Festival has been renamed the “IF Festival,” to suggest future possibilities, said the festival organizer Eum Eul-soon.

“[Last year] was an eventful year for women,” said Eum, who heads the IF organization, citing the downsizing of the Ministry of Gender Equality and using a portrait of the artist Shin Saim-dang, who died in 1551, for the new 50,000 won ($37.60) banknote, which will be printed this June. “But we want to shed light on the diverse lives and adversities of women, not in outspoken ways as we did in the past.”

The opening of this year’s festival, which begins on Saturday, features former singers of the Korea National Opera. They were irregular workers and paid minimum wage by the KNO without insurance.

There will also be skits. “Paradise of Their Own” satirizes the ugly side of Korean society, which hurts women such as the late actress Jang Ja-yeon who apparently took her own life because she was forced to have sex with high-profile entertainment figures.

More lighthearted performances will include a group of 50-something women dancing to Abba’s “Waterloo.”

The 11th “IF Festival” will be held on Saturday from 7 p.m. at Mary Hall, Sogang University, Mapo District. Go to Sinchon Station, line No. 2, exit 6.