Structured for urban art and culture

Structured for urban art and culture 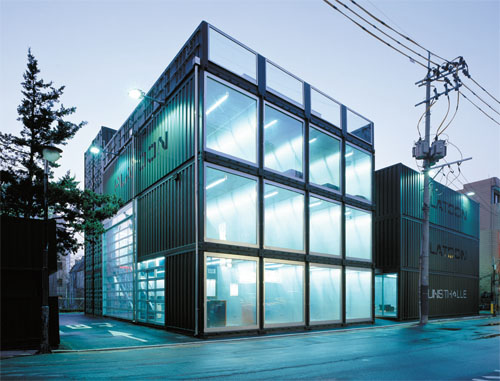 Platoon Kunsthalle is a place for art and performance in Nonhyeon-dong, southern Seoul

A new structure has recently appeared on the trendy streets of Gangnam District’s Nonhyeon-dong in southern Seoul. Built from 28 cargo containers, the structure has a bank of windows that reveal mannequins wearing glasses on one side and an interior replete with murals on another. The stacked containers form a unique and flexible structure that can be rebuilt anywhere else and at anytime.

The building is Platoon Kunsthalle, the Asian branch of Platoon Europe, which opened in 2000 in Berlin and was founded by Christophe Frank and Tom Buschemann as a space for artists. In Germany, Kunsthalle are set up by local artists for temporary exhibitions. 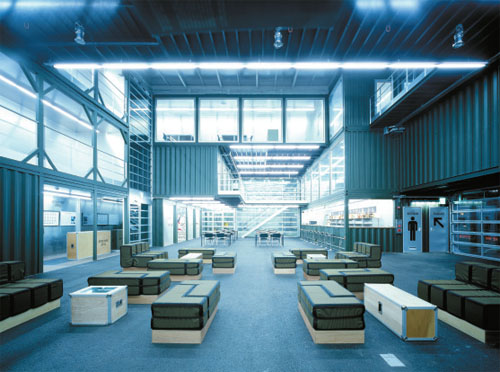 The main hall can be used as a cafe or bar during the day.

“When it opened [in Europe], it was a huge success,” said Kim Hyun-jeong, a Platoon Kunsthalle spokeswoman. “After that, they wanted to open a branch in Asia and were looking for a place. They initially thought about setting up a branch in China or Japan, but eventually chose to open it in Seoul.” 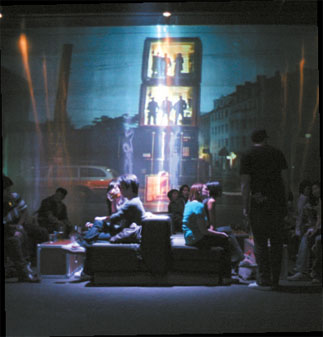 A club at night. Provided by Platoon Kunsthalle

The Seoul space intends to stage performances and promote the work of underground artists. It also offers a residency program for artists that culminates in a performance or exhibition, and scholarship programs that give young and upcoming artists from Korea and abroad the opportunity to develop creative projects.

On weekends, the space is transformed into a lounge, a club or a movie theater, depending on the event. German DJs Baya, Udo Lee and Bada Lehner bring their turntable talents to the space every Friday night, as dazzling graphic images play on a huge screen.

The exhibition space on the first floor houses a monthly exhibition of new and emerging artists. The current exhibition features four Korean artists working in multiple media who use art to communicate their visions of the world.

Beom uses character design and illustrations to express his thoughts on society and life. In his “Dummymen” series, hundreds of crash test dummies take a run at capitalism in a satirical piece that comments on Korea’s consumption-oriented society.

Song Hojun is an engineer, computer scientist and musician who once worked with a company that produces artificial satellites. He mixes different kinds of technology including microprocessors and sensors to make his artistic creations, which he sees as means of social commentary.

Graffiti Research Lab experiments with open source technologies for urban communication. The group, which carries on the tradition of guerrilla art, attracted attention with its “Led-throwies” and the laser tag system, a light-graffiti system, which they also presented in the Hongik University area in northwest Seoul in 2008.

VS uses martial arts imagery and color symbolism to investigate identity and provide a critique of society. He has gained inspiration from street art and currently experiments with various forms of photography.

The main hall, with its high ceilings and windowed walls, houses a cafe and bar serving German foods like curry wurst and schnitzel. Main dishes like these go for between 5,000 won ($3.98) and 12,000 won.

The second floor, which houses the artists-in-residence program, has a book cafe and four studios. The cafe has foreign language books on art, photography and design that are not easy to find in Korea.

The third floor is reserved for offices and a seminar room.

And the fourth floor features a rooftop bar where people can enjoy the afternoon sunlight or evening breeze.