Enemies embrace on the soccer field

Enemies embrace on the soccer field 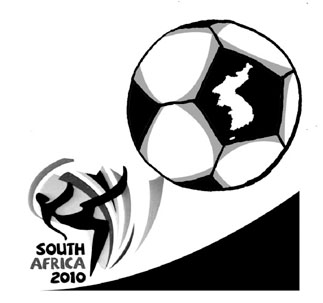 Until the 1970s, soccer games between South and North Korea were even scarier than Korea-Japan games for fans. All pride aside, they were games “we could not afford to lose as if our lives depended on it.”

In 1965, when North Korea announced it would enter the World Cup preliminaries, South Korea chose not to participate. The idea was that it would be better not to enter at all than to lose to the North. Just as expected, North Korea made it through the preliminary round and won 1 to 0 against the powerful Italians in the next round to enter the quarterfinals, causing quite a stir in international soccer. Shocked, South Korea reorganized its team and attempted to take on its counterpart at the 1970 Mexico World Cup, but that time North Korea backed out.

The North Korean soccer team first entered the Asian Games in Tehran in 1974. This was right after First Lady Yook Young-soo was shot to death at the National Liberation Day celebrations. Public opinion was that there was no reason to challenge North Korea, and South Korea grew farther away from victory as it lost game after game.

Four years later in 1978, the Asian Games were held in Bangkok. South Korea had a new secret weapon: Cha Bum-kun. Both Korean teams drove on nonstop to face each other at the finals, and the game ended in a 0 to 0 tie.

The psychological warfare continued on the winner’s podium. In “100 Years of Korean Soccer History,” Kim Ho-gon, team captain at the time and current head coach of the Ulsan Hyundai team, said, “I let the North Korean team captain go up first, but he did not give me any room to stand. In fact, the North Korean goalkeeper pushed me and I fell off.” However, when Kim finally made it onto the podium, he proposed, “Let’s join hands,” and the two captains put their arms around each other with smiles on their faces and gold medals around their necks.

The last half century of soccer games between the South and North seems to show us a compressed version of the many vicissitudes between the two countries. After many ups and downs South and North Korea have both entered the 2010 South African World Cup. I just hope both will play admirably in the finals and we will be able to re-enact the scene of our players putting their arms around each other, as they did in 1978.