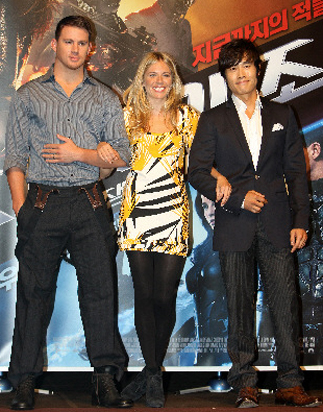 A press conference to promote “G.I. Joe: The Rise of Cobra” was held yesterday morning at The Shilla hotel, central Seoul. Channing Tatum and Sienna Miller were at the event, as well as Korean actor Lee Byung-hun. producer Lorenzo di Bonaventura and director Stephen Sommers. The group arrived in Korea the day before via Gimpo International Airport.

Tatum and Miller star as Duke and the Baroness, respectively, while Lee plays the role of Storm Shadow, a member of the terrorist organization Cobra. The film is Lee’s Hollywood debut.

“I had watched [Lee’s performance] before in ‘A Bittersweet Life’ and I was very impressed,” Tatum said.

G.I. Joe is a Hollywood blockbuster about a fight between an elite military unit and the notorious Cobra. The film opens in theaters Aug. 6.