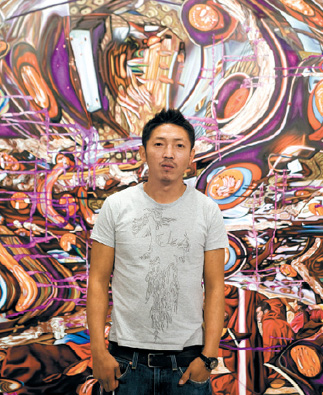 The sports and art worlds typically mix together about as well as water and oil.

While baseball fans would rather spend a Sunday afternoon gulping Cass and munching hot dogs at a ballpark, the art crowd can be found sipping wine and nibbling cheese in the cool confines of a gallery.

American painter Jin Meyerson, however, tries to bring the two sides together, depicting the excitement and passion of sports in a whirlpool of swirling colors sure to catch any art lover’s eye.

Meyerson’s first solo exhibition is currently on display at the Arario Seoul gallery in the central part of the city under the title “Forecast.” The Arario Cheonan in South Chungcheong will host a separate Meyerson exhibition on Sept. 18.

A total of 20 canvas works will be on display at the two galleries, including “Fever Pitch” and “Cold Sweat” at Arario Seoul and “The Death of Water” and “New Pilgrims” in Cheonan. Meyerson spent the past three months in a studio on Jeju Island provided by Arario, working on the paintings for the exhibitions.

The artist’s works are based on images from magazines and other cultural and entertainment mediums, ranging from CNN to Sports Illustrated. He sketches out scenes first and then distorts, tears apart, rearranges and fills them with psychedelic colors.

“A lot of times, I visualize it immediately,” Meyerson said.

Both his subject matter and his technique are characterized by jolting, hyperactive motions, jarring colors and intense details that drag viewers’ eyes back and forth across the paintings. The portrayal is often severely skewed by the inclusion of a turbulent vortex. Meyerson’s works induce a powerful - sometimes violent - sensation and a rush of adrenaline by using images of forces that lie beyond human control.

“I was 24 years old when I chose to select sports as a subject,” Meyerson said recently at a press conference in Seoul. “I wanted something as inartistic as possible to articulate the worst things about art: inaccessibility and pretentiousness.”

Asked why he distorted the images, Meyerson said, “Art is not about painting what we see. What is important is how we see it. Distortion affects the way we see it.”

In addition to his sports-centered pieces, Meyerson also focuses on depicting the issues surrounding us today, such as how the psychology of people and the appearances of cities and landscapes changed through massive industrialization.

Meyerson was born in Incheon in 1972. Later, he was adopted by American parents and grew up in rural Minnesota before pursuing his education in fine arts.

Currently, his works are part of public collections of the Solomon R. Guggenheim Museum, the Chelsea Art Museum and the Philadelphia Museum of American Art as well as private collections across Europe.