A joke, an ad, a political scandal

A joke, an ad, a political scandal 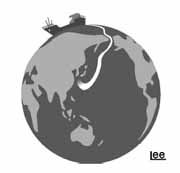 On June 10, 1987, one of the popular comedians of the time, Kim Byeong-jo, appeared on the stage of the convention of the ruling Democratic Justice Party. He said, “The Democratic Justice Party, or Min-jeong-dang, is the party that gives love to the people,” - because min means people and jeong means love in Korean - “while the opposition Unification Democratic Party, or Tong-min-dang is the party that gives pain to the people” - and tong, of course, means pain. The audience responded with laughter and applause.

The next day, however, Kim found himself under pressure to leave the broadcasting and advertisement business. Despite being armed with the excuse that he had no choice but to read the script given to him, the businesses were not convinced.

On Aug. 26, when the excitement of the general election in Japan reached its climax, a strange advertisement appeared in the right-leaning Sankei Shimbun. Outwardly, the four-page ad, which literally wrapped the paper, appeared to be promoting a new album by SMAP, the most popular male quintet in Japan.

What surprised people most was the content of the article in the inner pages of the advertisement. Under the headline, “How to make a happy country,” the article was supposedly written by SMAP members. The main points of the article went as follows: when the economy is strong, the popularity of the prime minister goes up, but it goes down when the economy is weak; happiness for the future starts with caring for people who are around you now; and it’s easy to put the blame on others, but nothing is easy if you try it yourself.

It was as clear as daylight that the article was supporting the Liberal Democratic Party, which was on the brink of crisis.

Western press reported this rare kind of advertisement in a big way. In an interview with the Daily Telegraph of the United Kingdom, Steven Reed, a professor at Chuo University in Japan, said, “SMAP have never been involved in a political campaign before and it is a surprise that they have apparently come to the aid of the LDP as that ship is very clearly sinking.”

But such a reaction came from the overseas press only. In the Japanese press, there was hardly a mention of such a thing. Although the edition of the Sankei Shimbun which carried the advertisement was much talked about and even auctioned off on the Internet, no one seemed to pay attention to the content of the article.

This is difficult to imagine in Korea, where once the most popular comedian in the country was forced out of the broadcasting business simply for uttering a few words he was forced to say. If a Korean music group carried a line in support of a certain party on their Web site with elections just around the corner, I wonder what would happen. Why is there such a big difference in the weight of an entertainer’s words in the two neighboring countries?