Battle for places on squad heats up

Battle for places on squad heats up 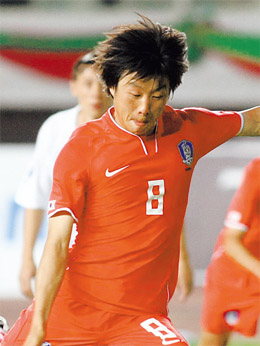 Kwak Tae-hwi and Kim Do-heon will make their return to the national football team in Europe later this month after national team manager Huh Jung-moo announced his 25-man roster for the upcoming friendly matches against Denmark on Nov. 14 and Serbia four days later.

Kwak, a fullback better known for his scoring prowess than his defensive abilities, and Kim, a midfielder who played for West Bromwich Albion, are the only noticeable changes in the squad.

“The upcoming friendlies are matches that will prepare us to play against European squads [in the World Cup],” Huh said at a press conference yesterday morning. “I chose players who can represent us at the World Cup. There are no tests.”

Both Kwak and Kim make a return to the team after a long layoff. 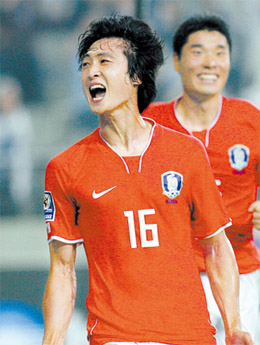 “Since returning from a knee injury [in September], Kwak has been playing well. When playing against European clubs, we need players who can matchup well against the height and strength of the European players. We examined which domestic players can fulfill those needs,” Huh explained.

Although Kim had been a starter on the national team in the past, the offensive-minded midfielder injured his knee in September 2008 playing in the English Premier League. Huh ended up replacing Kim with Ki Sung-yeung.

The young midfielder has become a mainstay in the starting lineup ever since, often taking free-kicks from the left wing.

“Both players are doing well. Kim went through a slump upon returning from England but has been playing well for Suwon of late. He has improved on his conditioning and mental attitude,” Huh said. “It will also be a good stage to see how Ki responds against bigger and stronger European players.”

The two players have been playing well of late. Since his comeback, Kwak has been a mainstay in the Chunnam Dragons’ defense while Kim has netted three goals and set up four others in the past seven games for the Suwon Bluewings.

While Lee Young-pyo and Oh Beom-seok had been mainstays at the fullback positions in the recent past, the addition of Cha Du-ri and Kwak will create competition among the players.

The same can be said about the midfield positions. Park Ji-sung, Lee Chung-yong, Ki Sung-yeung and Cho Won-hee have been the popular choices for Huh but the addition of Kim and former captain Kim Nam-il will also lead to increased jostling for places.

Huh said he is close to cementing his 25 man roster for the World Cup. He has also said previously that he wants to get the squad finalized next March.

Huh will make his final decisions after the upcoming friendly matches and a training session in which Huh will test domestic and young prospects.

Players on the bubble will have to make the best of their opportunities in Denmark and Serbia this month.

Due to the K-League Championships, which starts on Nov. 21, Kwak, Ki, Kim Chi-woo, Kim Jung-woo and Jung Sung-ryong will return to Korea after the Denmark match.

Huh has said he will take a close look at the five K-League postseason bound players first and then will focus on the remaining 20 players in the match against Serbia.