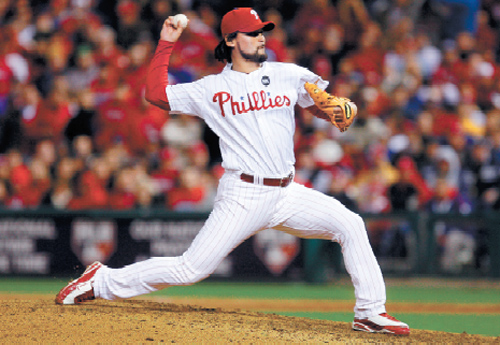 Philadelphia Phillies’ relief pitcher Park Chan-ho throws against the New York Yankees in the eighth inning in Game 5 of the 2009 Major League Baseball World Series in Philadelphia, on Nov. 2. [REUTERS]

The Philadelphia Phillies managed to win Game 5 of the World Series at Citizens Bank Park in Philadelphia, early yesterday (KST).

With the win, the Phillies managed to stave off elimination and pushed the series to game six to be played at Yankees Stadium.

Park Chan-ho made an appearance in the top of the eighth inning with his team holding an 8-4 lead and diffused the surging Yankees batting order.

The biggest contributors for the Phillies on the night were Cliff Lee and Chase Utley. Utley smashed two home runs to bring his series total to five, which tied the all-time World Series record for the most home runs, set by Reggie Jackson in 1977. Lee played his part by pitching seven solid innings before being tagged for two runs in the eighth inning.

Making an appearance in his second consecutive game, Park threw 11 pitches with seven of them for strikes, with no strikeouts or walks.

The 36-year-old veteran pitcher relied on his sinking fastball, which clocked in at 144 to 146 kilometers per hour (89 to 91 miles per hour), to retire the Yankees’ batters.

The Phillies had a comfortable 8-2 lead going into the eighth inning. However, Phillies starting pitcher Cliff Lee showed signs of fatigue in the eighth as Johnny Damon singled to start the inning. Mark Teixeira followed up with a double and Damon advanced to third. Riding the momentum, Alex Rodriguez hit a double to left field to drive in both Damon and Teixeira.

Phillies manager Charlie Manuel decided to go to his bullpen at this point and went to veteran pitcher Park. With Teixeira on second and no outs, Park proceeded to work on the Yankees’ batters as he got Nick Swisher to ground out.

Rodriguez advanced to third on the play. In the ensuing play, Robinson Cano’s sacrifice fly to center field scored Rodriguez to make the game 8-5 but the run was charged to starter Lee. Park then got Brett Gardner on an infield pop up. The Phillies decided to go with Ryan Madson as their closer in the ninth inning and although he gave up a run on three hits, the Phillies won their second game of the series.

The Yankees will go with their veteran southpaw pitcher Andy Pettitte while the Phillies will counter with Pedro Martinez in game six on Thursday morning (KST).