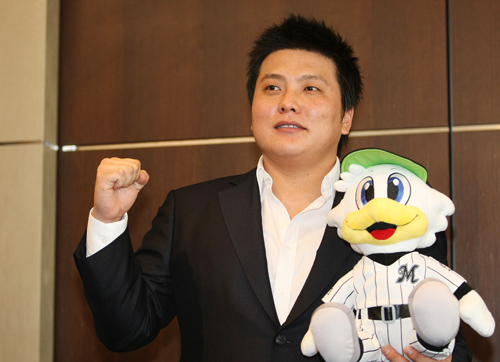 First baseman Kim Tae-kyun signed a three-year deal worth around 500 million yen ($5.57 million) over the weekend with the Chiba Lotte Marines of Nippon Professional Baseball. The deal’s details were announced at a press conference early Friday last week.

The free agent broke into the Korea Baseball Organization in 2001 with the Hanwha Eagles and posted a .310 batting average and 188 home runs over nine years with the Eagles.

Kim was by far the most intriguing free agent this offseason and he is said to have turned down a four-year offer worth 6 billion won ($5.19 million) from the Eagles. The deal would have been the most lucrative deal in the history of the KBO.

His current deal with Chiba Lotte will allow Kim to net up to 700 million yen including options.

“I want to thank the Chiba Lotte club who rated me high on their offseason list of priorities,” Kim said at a press conference at Lotte Hotel in Sogong-dong, central Seoul. “I also want to apologize to the Hanwha fans for leaving the club after a season in which the Eagles finished last in league standings for the first time under Hanwha sponsorship.”

Chiba Lotte became enamored with the slugger after Kim displayed his power and clutch hitting at the World Baseball Classics in March by batting .345 with three home runs and 11 RBI.

Chiba Lotte’s President Ryuzo Setoyama negotiated with Kim’s side on the deal and Kim is expected to play first base and bat cleanup in the Marines’ lineup next season.

“We are honored to have signed a player of Kim’s caliber. I will help in any way possible so that Kim can have a successful career in Japan and in turn make baseball fans happy. I ask for a lot of support from Korean baseball fans,” Setoyama stated.

Kim becomes the second Korean cleanup hitter for the Chiba Lotte Marines. Chiba Lotte experienced success with another Korean slugger when it signed former Samsung Lion Lee Seung-yeop to a two-year deal back in 2004.

“Although Lee has struggled this past season, I watched a lot of his games and tried to learn by watching his swing. The home run record he has left behind is amazing. I have always respected him and want to follow in his footsteps,” Kim said.