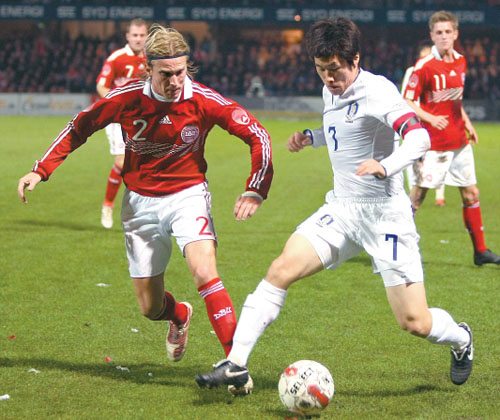 The national football team managed to extend its unbeaten streak to 27 games by playing Denmark to a scoreless draw at the Blue Water Arena in Esbjerg, Denmark yesterday. Playing in their first big test on foreign soil under Huh, Korea showed some ability to create chances on offense but will have to work on their defense for the match against Serbia on Wednesday.

The friendly in Denmark was not an easy one for manager Huh Jung-moo and his men as they were facing a team that had edged Portugal, Sweden and Hungary to place first in Group A of their regional 2010 World Cup qualifiers.

“Denmark is a good team. Facing a strong team, our players did not do a bad job,” said Huh. “It was a tough match but a good experience for our players. Considering the condition of the pitch was poor and our players were still recovering from jet lag, we can definitely improve in the future.”

Ranked significantly lower at 48th in the world, Korea were considered underdogs. But with seven players from its regular lineup out with injuries, including Daniel Agger of Liverpool and Jon Dahl Tomasson of Feyenoord, Denmark was shorthanded for the match.

“We used a lot of players who lacked experience in international matches but the result was not all that bad,” said the Danish manager Morten Olsen after the match, adding that he agreed the pitch was in a bad state. “Our forwards failed to capitalize on some chances but we also managed to overcome some dangerous situations.”

Team captain Park Ji-sung was the lone bright spot in the game. Having missed 11 consecutive games for Manchester United with an injury to his right knee, yesterday’s game against Denmark was Park’s first since the Oct. 14 friendly against Senegal in Seoul.

Park was able to keep up his usual busy pace throughout the match despite his prolonged layoff. Park provided Lee Dong-gook, Lee Keun-ho and Lee Chung-yong with solid passes that nearly resulted in goals. He was substituted in the 66th minute for Yeom Ki-hoon.

“I had intended on using Park for 50 to 70 minutes in the match. The Manchester United physical trainer had also shown his concern that Park would not be able to play the full 90 minutes in both matches,” Huh said. “I will play Park for about the same amount of time in Wednesday’s match against Serbia.”

“We need a forward who can penetrate the opposing defense. If Park [Chu-young] had been available today, we could’ve had a better result but our forwards came up a bit short today. Although our midfielders played well, our forwards failed to deliver. Lee Dong-gook, Lee Keun-ho and Seol Ki-hyeon played hard but it did not work out as they had hoped,” Huh said.

With the K-League playoffs looming on the weekend, the national team will have to play the friendly match on Wednesday against Serbia in London, England without its domestic players. Huh will send five players back to their teams: Ki Sung-yeung, Kim Chi-woo, Kwak Tae-hwi, Kim Jung-woo and Jung Sung-ryong.