Tennis great Federer feeling on top of the world

Tennis great Federer feeling on top of the world 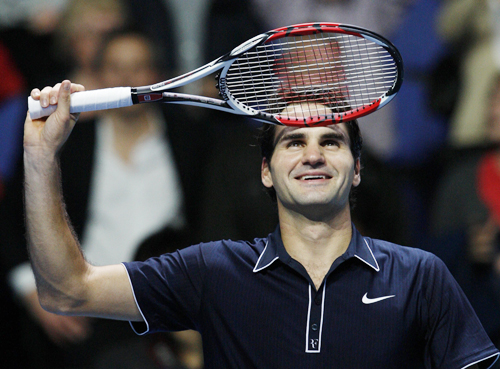 LONDON - Roger Federer said finishing the season as world No. 1 counts among his greatest achievements in the game, given the dramatic upheaval in his personal life this year.

But the Swiss insisted he will still be giving it his all to qualify for the semifinals of the season-ending ATP World Tour Finals tournament. Federer beat Britain’s Andy Murray 3-6, 6-3, 6-1 on Tuesday at the O2 Arena in southeast London, a victory which ensured Spain’s Rafael Nadal could no longer overtake him as the world No. 1 this year. However, it was not enough to secure his passage to the last four, and he may well have to defeat Argentina’s Juan Martin del Potro - who beat the Swiss in this year’s U.S. Open final - to bag a semifinal spot. Finishing the year at the top “was one of my big goals for this season,” Federer said. “And it’s one of the greatest performances I think I’ve ever had.”

Now, world No. 5 del Potro, who has won one match out of two so far, could stop Federer qualifying for the semifinals, in the third and final round of group stage games.

“He’s definitely in for a shot. It could be a make-or-break match for us to get through. If that’s the case, I’ll give it all I have and try to beat him this time,” Federer, the French Open and Wimbledon champion, said. “It seems like he’s playing well. He looks like he’s getting better as the tournament goes on.”

All four players in Group A go into the final round-robin games with a chance of making the semis. Murray, the world No. 4, said he would be going all-out to beat Spain’s Fernando Verdasco in a bid to get through to the semis.

“The only important thing is to try and qualify from the group, whether you win one match, three matches or two matches. Last year I won three, then lost in the semis. This year I could potentially lose two matches and win the tournament. So you just never know.”

Despite taking the first set against Federer, Murray slowly faded in front of the 17,500 capacity crowd.

“The one thing that’s been a problem for me since I came back was I played well in the first set of the matches. Then when the adrenaline wears off, I don’t know, there’s not quite the same spark in the legs that there was at the start of the year,” Murray said. AFP