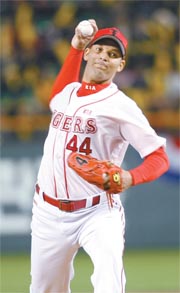 The Kia Tigers have resigned Aquilino Lopez to a one-year deal, the team announced yesterday. The Gwangju-based club inked an agreement with the 34-year-old starting pitcher valued at $375,000, which includes a base salary of $300,000 and a signing bonus of $75,000.

“I feel comfortable with the Kia Tigers and about playing in Korea,” Lopez said in a statement released by the Tigers. “I want to thank my teammates and team officials. If the opportunity presented itself, I had wanted to return to the Tigers. Since I now have that opportunity, I want to work hard to produce better results in the upcoming season.”

Kia team officials had made signing Lopez a top priority this off-season, sending two representatives to the Dominican Republic to speak with the player. In signing the one-year deal, Lopez becomes the first overseas player to finalize an agreement with a KBO club this off-season.

Lopez is currently training on his own in the Dominican Republic and is expected to join the team for training in Guam or Japan in January.

The Dominican Republic native had teamed with American Rick Guttormson to provide the Tigers with the most dominating starting rotation in the KBO last season. Having made his Major League Baseball debut with the Toronto Blue Jays in 2003, Lopez went on to play for the Colorado Rockies, Philadelphia Phillies and Detroit Tigers during a five-year span in the MLB.

The veteran pitcher appeared in 29 games and posted a record of 14 wins and five losses with a 3.12 ERA and 129 strikeouts. In his first KBO season, Lopez led the league in strikeouts and innings pitched (190.1). Lopez earned wins in game one and five of the Korean Series and appeared out of the bullpen in the eighth inning of game seven. He has also been nominated for the Golden Glove award.