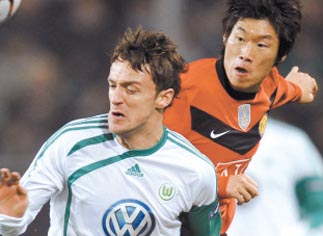 With his team short on defenders due to injuries and illness, Park Ji-sung was called in to play defense in the game against VfL Wolfsburg, yesterday, and the versatile winger did not disappoint. Park started the game as the right wing back and played much of the second half as the right full back.

While Michael Owen’s hat-trick was the story of the match, Park gave the injury-plagued Manchester United defense a boost. Park not only provided stability on defense but also contributed on offense. With a total of eight defenders missing from the game, the 28-year-old teamed up with Patrice Evra, Darren Fletcher and Michael Carrick to form a four-man line of defense in the second half. Park last played full back for the national team at the 2000 Sydney Olympics, where he had a couple of lapses in coverage but fared well overall.

The Manchester Evening News gave Park a grade of seven for the match, saying that he “ran himself to a standstill up and down United’s right flank as full back and midfield.”

“It’s the first time I played the position since my collegiate days at Myongji University. I’m happy that we won the match, and although we gave up a goal, I thought we played well despite missing many players on defense,” stated Park in an interview on Manchester United’s official Web site.

Several Manchester United team members including Rio Ferdinand, Wes Brown, Jonny Evans, and John O’Shea are dealing with injuries. That makes it likely Park will play in a match against Aston Villa at Old Trafford on Sunday.