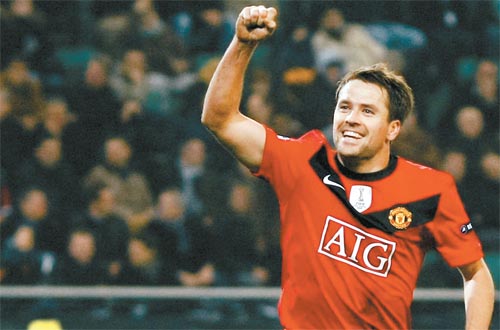 Michael Owen of Manchester United celebrates after scoring during the Champions League soccer match against VfL Wolfsburg in Wolfsburg, Germany on Dec. 8. [REUTERS]

WOLFSBURG, Germany - England striker Michael Owen hit a Champions League hat-trick on Tuesday to give national coach Fabio Capello a timely reminder of his talent as Manchester United finished top of their group.

Owen, who turns 30 on Dec. 14, demonstrated his finishing class with a well-taken hat-trick to seal United’s 3-1 victory at Wolfsburg to dump the Germans out of the Champions League and boost his World Cup chances. It was Owen’s first Champions League hat-trick since joining Manchester United last summer. After his first-half header, Owen nailed his second at 83 minutes before producing a superb effort in extra-time to claim his third.

“Michael Owen is one of the best strikers in the last third of the field in terms of his movement, his positional play and also in terms of his finishing,” insisted Manchester coach Sir Alex Ferguson.

And the Scot hinted a place in United’s first-choice side may well be reserved for Owen, who is England’s fourth-highest scorer with 40 goals for his country.

“At the end of the day, the evidence is on the football field, and he gave plenty of that tonight,” said Ferguson. “I have no worries of playing him. He has improved steadily in training.

With halftime beckoning, Owen grabbed his first goal when Nani swung in a cross and the England striker slipped his marker to head home on 44 minutes. Then with time running out, United replacement Gabriel Obertan put in a crisp pass that found Owen unmarked in the penalty area and the striker stabbed his shot home at 83 minutes. He showed his class with the third as United broke from their own goal and Obertan again released Owen down the flank before the striker chipped the ball over Wolfsburg goalkeeper Diego Benaglio in injury-time. With just one fit first-choice defender on his squad, Ferguson opted to play a 3-5-2 formation to cope with Wolfsburg strikers Edin Dzeko and Grafite.

“It was a risk in terms of changing the system and we were concerned about containing Dzeko and Grafite,” Ferguson said. “There was some pressure on Wolfsburg to and that suited us as we could afford to be patient.

“They missed two chances to go ahead in the first-half and we may have had to change things if we had been playing catch up.”

Dzeko equalized for the Germans in the second-half only to see Owen score three. AFP