Footballer looks ahead and abroad for ’10 season

Footballer looks ahead and abroad for ’10 season 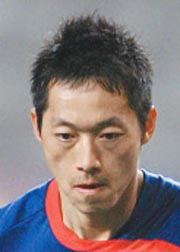 For former national football team captain Kim Nam-il, 2009 was a tough year. Having completed his contract with Vissel Kobe of the J-League, Kim left for Moscow, Russia on Sunday to finalize a contract with FC Tom Tomsk of the Russian Premier League.

“Since I started playing football, I don’t think I’ve had a tougher year than what I went through this year. I was selected to the national team again after a long layoff and in order to continue to improve and challenge myself, I chose the Russian league,” he said.

Kim will go through medical tests and necessary steps to finalize the deal with Tom Tomsk and will return to Korea on Thursday. He will join his new team for training in mid-January. Thus, Kim will likely not be able to join national team training on Dec. 26 or the overseas training camps in January.

Kim, at 33, is a tested veteran. But no longer a young player, and coming off injuries, it is not easy for him to take on new challenges. Those close to him tried to stop Kim, saying taking on risks and new challenges in a World Cup year could backfire. Although a new deal with his former team Vissel Kobe fell though, J-League clubs such as Yokohama, Kyoto and others showed plenty of interest in the veteran midfielder.

“Since returning to the national team, I felt the need to get stronger physically and mentally. I chose the Russian Premier League for those reasons,” explained Kim.

One of the determining factors in Kim’s decision was last month’s friendly match against Serbia.

“I played against well-rounded European players for the first time in a while, and it was tough to match up physically with the ones on the pitch. Some said I fulfilled my role in playing the entire 90 minutes but it wasn’t up to my standards,” Kim said.

The Korean veteran was also interested in joining Tom Tomsk because of manager Valeri Nepomniachi and the high level of competition in Russia. Nepomniachi managed Bucheon SK from 1996-98 and knows Korean players. He sent team officials to the friendly against Serbia and was pleased with the report on Kim’s performance.

“I played against the Bucheon squad under Nepomniachi in the past and they were a tricky team. Joining Tomsk also gives me a chance to play in the UEFA Champions League. If the team places in the top four in league play, I am also looking to redeem myself for the six-month stint in the Dutch league,” explained Kim.

As Kim explains it, the only reason why he hesitated to sign with Tom Tomsk was because of his family. Playing abroad would mean leaving behind his wife, Kim Bo-min, a KBS announcer, and his three-month-old son. With the support of his wife, the footballer is ready to hone his game in the Russian League in preparation for the World Cup.